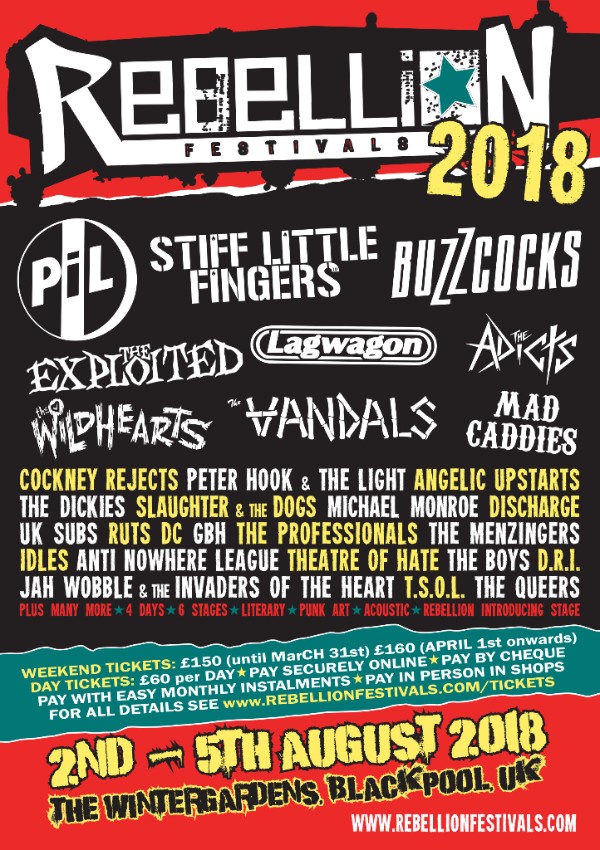 US PUNKS THE MENZINGERS AND THE VANDALS ALSO CONFIRMED THIS WEEK

It’s hard to name a more iconic and influential post-punk band on modern music than John Lydon’s post-Pistols group Public Image Limited (PiL), who are today confirmed to perform at Rebellion Festival in 2018 for the first time since 2012. Since their formation following the Sex Pistols collapse in 1978, Public Image Limited (PiL) have crafted some of the most forward thinking sounds to emerge from the post-punk wreckage and continue to do so to this day. Their set is guaranteed to thrill and inspire and it’s an honour to have them back.

Also announced this week come Pennsylvania punks The Menzingers, who return to the festival this year bringing with them an arsenal of gritty anthemic tunes.

“A couple of pints by the shore in a Stephen King-esque British ocean town swarming with generations of punks filing in and out all weekend to a soundtrack of living legends? Sign me the fuck up,” exclaimed guitarist Tom May excitedly.

Joining them in this week’s announcements comes the welcome addition of Californian melodic punk legends The Vandals, who have been bringing humour and fun to the scene since they formed in 1980. They join a line-up that Rebellion Festival is known and respected for the world over, bringing together the best and most vital bands from the long and varied world of punk and alternative music. Rebellion Festival reflects the very best of what the scene has to offer. Acts already confirmed include Stiff Little Fingers, Buzzcocks, The Exploited, Cockney Rejects, The Adicts, Peter Hook & The Light, Angelic Upstarts, Discharge, Ruts DC, UK Subs The Wildhearts, Lagwagon and Slaughter & The Dogs, joining a host of punk and hardcore bands from around the world, including legends such as D.R.I., The Adolescents, Toxic Reasons, Raw Power and many more. These, plus scores of new acts from the around the world ensure that Rebellion Festival is still the main event when it comes to punk rock in 2018.

Head to www.rebellionfestival.com for more information.

Many more bands, running-order and stage times still to be announced.

Rebellion Festival is an ALL AGES, family friendly event and children under 12 are admitted free of charge (accompanied by an adult). More information and tickets are available at: