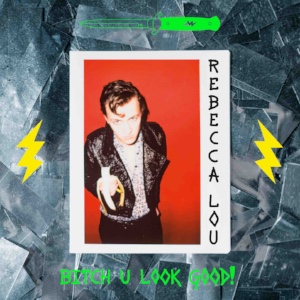 Danish artist Rebecca L. Armstong, aka Rebecca Lou, is now ready to blast into your eardrums with her riotous debut single Bitch U Look Good!, released on 2nd February 2018 via We Are Suburban.

Rebecca Lou’s riot grrrl-in debted single Bitch U Look Good is out now via We Are Suburban. On the themes of the track, Rebecca explained: “Again and again I was confronted with the fact that people felt the need to comment on my body and it made me feel like crap. ‘Bitch U Look Good’ is an anthem for self love and re-claiming your right to feel hot as fuck, no matter the skin you’re in.”.

A tribute to your own hotness and loving your body, Bitch U Look Good! is an empowering anthem in the face of all the prescriptive body ideals we are faced with everyday. Propelled by raging riffs and the soaring power of Armstong’s gritty vocals, it immediately hits you with its thrashing intensity and electrifying, Riot Grrrl-inspired, energy, resulting in a delightfully raucous slice of punk-rock.

Having only been writing songs since 2015, Rebecca Lou offers a refreshing, in your face, dose of self confidence that is needed now more than ever. Joining forces with Paw Skovbye (bass), Joachim Holmgaard (guitars) and August Ottsen (drums), she has fast been building a reputation across Denmark for her frenzied live shows, and has supported Danish rockers Velvet Volumeon tour last year.

Now, with the release of her hard-hitting debut single, she hopes to spread her formidable message to the UK and beyond. Bitch U Look Good!,the debut single from Rebecca Lou, is out now.