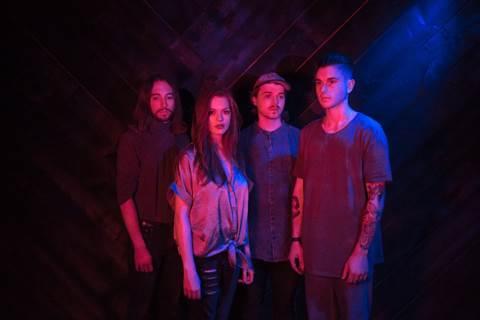 “‘Temps’ sees the band weaving reverb-drenched pop filed with snapping drum beats with a psychedelic sheen inspired by the late 60s. It’s ethereal yet heart-stopping, marrying some of its more twinkling electronic elements with a truly explosive, intense hook, Harriet Joseph anchoring it all with another commanding, powerful vocal performance.” – DIY Magazine

“The London foursome’s sound is deep, seductive and dark” – Loud and Quiet Magazine

Nighttime psych-pop four-piece Mellow Gang made their wondrous debut last year with their ‘Play’ EP which received critical acclaim from the likes of BBC 6 Music, Loud and Quiet Magazine, Clash Magazine, London In Stereo and many more. They spent much of their first year playing across the country, this included Oxford’s Ritual Union Festival where they played beside titans of the genre such as Peace, Black Honey, Pinkshinyunltrablast and more.

Brand new single ‘Temps’ showcases a lush soundscape invigorated by the intrepid, evocative production of late 60’s psychedelia. It’s a heady, ethereal sound led by vocalist Harriet Joseph’s husky tenor. She fills the brooding atmosphere with theatrical melancholy, casting haunting shadows across a soundtrack that simmers with tension and obsession. Lana Del Rey comparisons are inescapable when her cool detachment wells up into a wail of emotional anguish, she sounds tragic and beautiful throughout, luxuriating in a bleak space between dream and reality.

“We’ve actually tried to steer away from writing on personal relationships before” she explains, “but with ‘Temps’ for the first time it was a subject too relevant and intoxicating to discard with writing, at the time. It centers on an emotional alternation between realising some relationships, being friends or romantic, were only supposed to be temporary, and the helpless limbo that comes with all of the inconsistency of trying to salvage anything out of desperation. Reflectively, yes it’s sad, as you become dependent, but also hopeful. There’s always aggression towards the end, but in calling it a day, it’s deciding whether to be kind, or just let that hot and cold frustration turn into a front you later regret.”

Bandmates Shen, Nick GK and Joe Wood provide effortless backing with their infectious blend of psychedelia and beautifully crafted electronica that not only sets a perfect ambient canvas for Harriet’s vocals but also lifts and swells emotively with each divine expression. Their ambitious instrumentation and spellbinding musicianship is as sensuous as the best of Beach House and Tame Impala but it’s the unique mix of Mellow Gang as a single unit that sets them worlds apart from their contemporaries.

Mellow Gang are to embark on their largest UK tour yet and can be seen on the following dates: