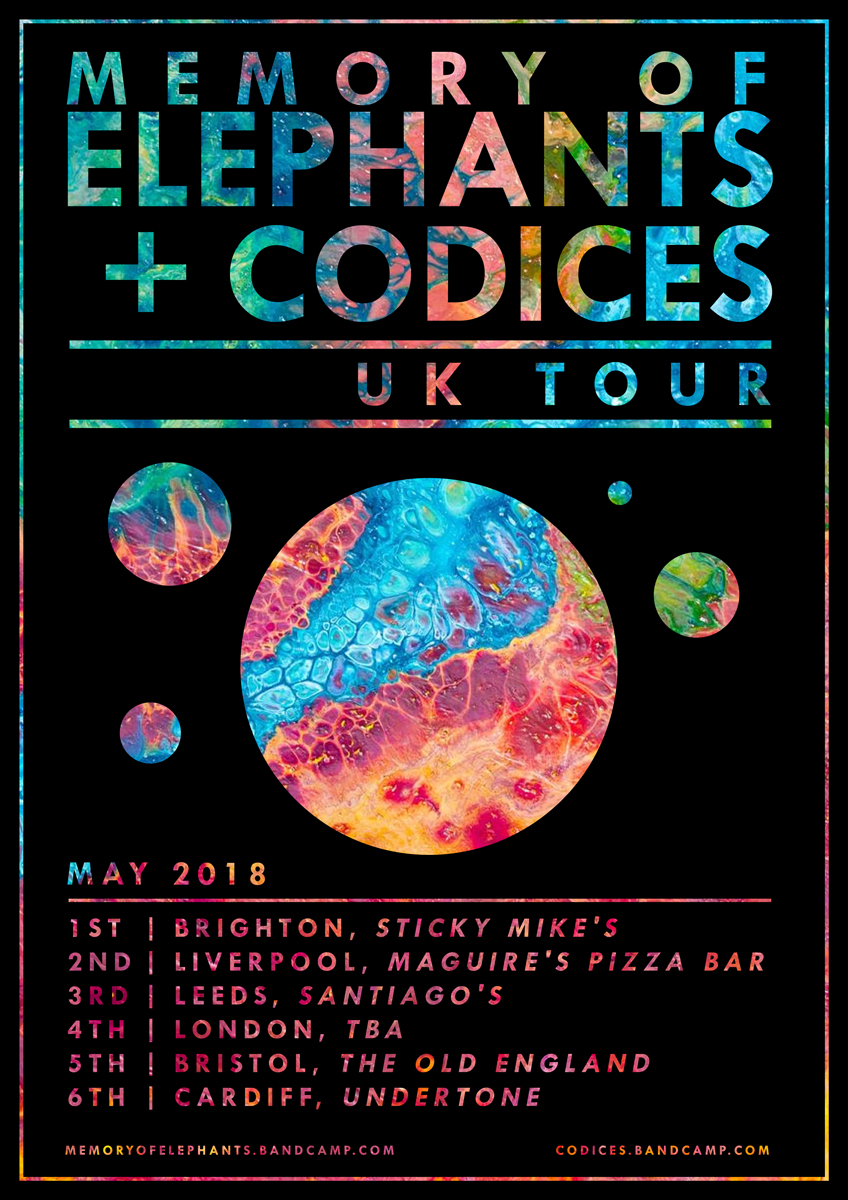 Two exciting experimental/math-rock bands, Memory of Elephants and Codices have announced a 6-date UK tour in May 2018.

Memory of Elephants headline the tour, and add a psychedelic, noisy twist on their math-rock sound. The band coalesce testosterone fuelled madness with an intelligent melodic sensibility.
​
Hot off the back of a record-equaling four appearances at ArcTanGent Festival and support slots for the likes of And So I Watch You From Afar, Nordic Giants, Pelican, Gallops and many more, MoE are one of the most exciting bands on the math/experimental scene right now.
Speaking of the tour, guitarist Toby Stewart comments:
“We really excited to play new material from our upcoming album on the tour (due later in 2018). We feel like we’ve found a cohesive sound but are also pushing each other into new and exciting directions. We can’t wait to share new material with people in some of our favourite cities in the UK“.
Listen here
Watch here
Facebook
FFO: And So I Watch You From Afar, My Bloody Valentine, Alpha Male Tea Party.
“If you’re a great calligrapher, writing in the conventional sense would only serve to bore you. Memory of Elephants are so proficient that they seem intent on ripping up the notepad and constructing origami with the debris” (Breeder Magazine).
Supporting them are up-and-coming London 4-piece Codices. Despite only being a band for less than a year, Codices crafted a unique sound on their debut EP ‘Illuminations‘ (released May 2017) which combines math and post-rock with both riotous and sensitive moments.
Drummer Alex Mann notes:
“Our first tour [November 2017] really allowed us to hone our chops. We’ve grown a lot as a band, both in terms of our live performances and our songwriting. We really believe in our new material and look forward to stepping things up a gear on this tour“.
Listen here
Watch here
Facebook
FFO: Brontide, And So I Watch You From Afar, Physics House Band, Russian Circles
“Essential. A game changer. 9/10” (Alt Dialogue).

Jerusalem In My Heart reveal new track from second album of expansive Montreal via Beirut compositions, named ‘If He Dies, If If If If If If’‏