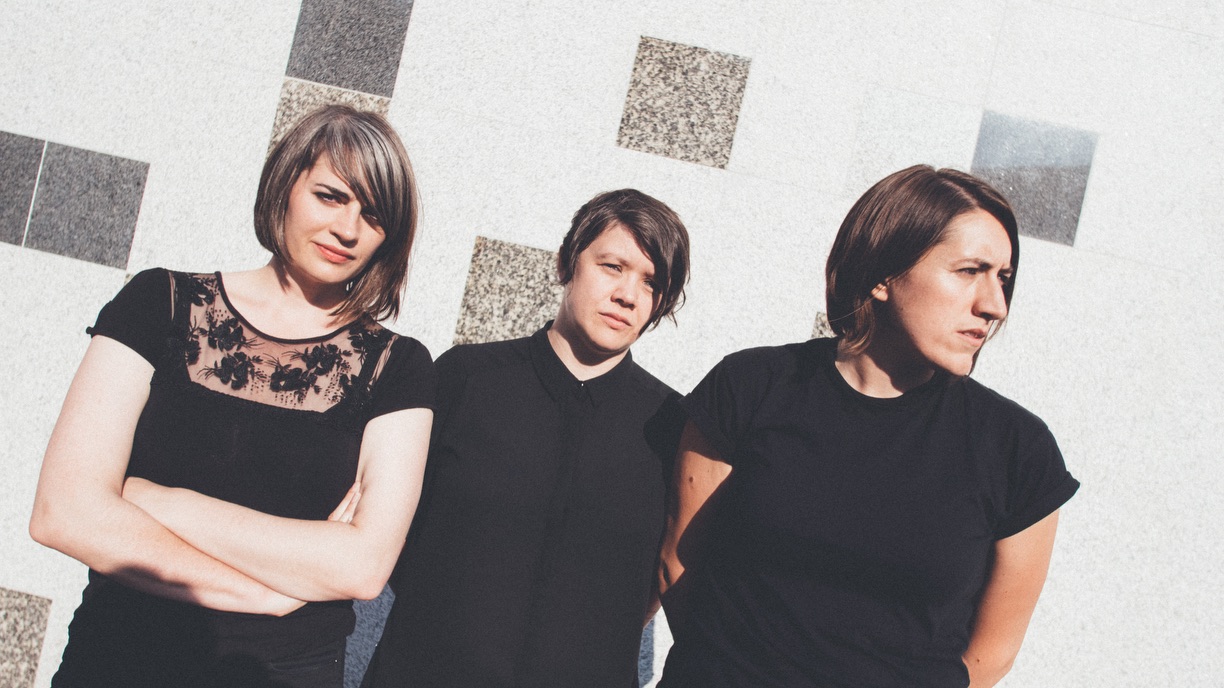 LIINES Share New Single Shallow
& Announce Debut Album ‘Stop – Start’, Released 4 May, Reckless Yes Records
“Powerful post-punk that brings in touches of grunge and new wave.” – Louder Than War
“LIINES are one of the most refreshing sounds to emerge.” – Gigslutz
“Tight-as-you-like snarly pop coated in a holy racket of guitar noise.” – The Quietus
“All the brooding, impassioned energy you could ever desire.” – Get In To Her Ears
“Moody and brooding.”  – Collapse Board
LIINES are Zoe McVeigh (vocals/guitar), Tamsin Middleton (bass) & Leila O’Sullivan (drums).
LIINES release new single Shallow  and announce the release of their debut album ‘Stop – Start’ on 4 May via Reckless Yes Records.
The Manchester trio are a prominent band in the post-punk/new-wave scene, with comparisons ranging from Savages to PINS to Desperate Journalist. Their sound is an infectious, urgent and at times furious blend of Riot Grrrl, post-punk and alt-rock sounds which take in elements of their collective influences. There’s the dark angular undertones and brooding introspection of Joy Division, the high energy of The Pixies and the emotive, impassioned sound of Sleater-Kinney wrapped in catchy fast-paced riff-laden songs.
New single Shallow is infectious and intense slab of post-punk-meets-Riot Grrrl which musically conveys the song’s subject matter of obsession and the anxiety that comes with that sort of experience. As vocalist Zoe McVeigh expands: “It’s relentless and on loop, which I hope shows how it feels when those kinds of obsessive feelings develop and won’t let up. I wanted a song that made the listener feel like they were suffocating and almost relieved when it was over.”
Shallow is the forth single from LIINES following 2016’s Never There and 2017’s Blackout and double-A single Disappear/Be Here, which collectively garnered support from (among others) Radio X (John Kennedy), BBC Introducing, BBC 6 Music (Tom Robinson), Amazing Radio, Gigslutz, Louder Than War, Collapse Board and The Quietus.
Over the last 18 month LIINES have performed at a string of festivals including Ramsbottom, Dot to Dot, Camden Rocks, Loud Women, #Blogtober and Off The Record. More recently they have played with Hot Snakes, Desperate Journalist and Nelson Can. They play the following UK dates this Spring:
LIVE:
2 March: Night People, Manchester
10 March: The Audacious Art Experiment, Sheffield
16 March: Tooting Tram and Social  (John Kennedy Radio X night), London
30 March: The Golden Lion, Todmorden **
13 April: Sound Food & Drink, Liverpool
All headline shows bar **
Ticket links here
Shallow is out today as a digital single via iTunes and across all streaming platforms. It is also available as a Free Download on all pre-orders of LIINES forthcoming long-player ’Stop – Start’ via Bandcamp. LIINES debut album ’Stop – Start’ follows on 4 May via Reckless Yes Records.
All songs written by LIINES and recorded at Unit 13 Studios, London and produced, mixed and mastered by Paul Tipler (Elastica, Idlewild, Placebo, Stereolab).
STOP – START TRACKLIST:
1. Shallow
2. Never There
3. Be Here
4. Find Something
5. Cold
6. Blackout
7. Disappear
8. Hold Your Breath
9. Never Wanted This
10. Nothing
http://www.weareliines.com/