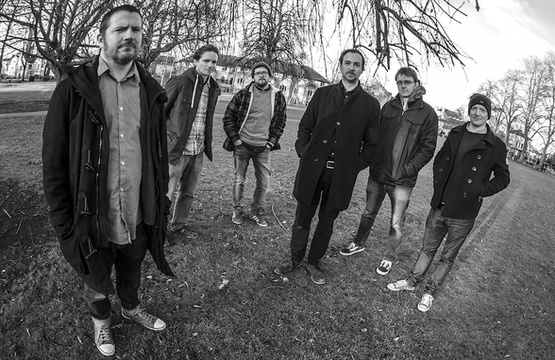 Hey Colossus are on the road again in support of last year’s “utterly compelling” (Record Collector) album The Guillotine (Rocket Recordings). The live dates include an appearance at Rocket Recordings’ 20 year birthday party which is being held at The Garage in London on the 9th, 10th, and 11th March – full dates and details below.

About the anniversary show, Hey Colossus reflect…”We ALL went to Rocket’s 10th Anniversary show in Kings Cross, the weather was warm and dry. We sat outside for great periods of time, it seemed like the whole of London’s underground music world was there. Popping in and out to see bands, hanging out the front, drinking too much, shouting the odds. It was on this night, at this show, that we asked Paul to join. We wanted a front man. Paul thought about it, and we nagged, and he said yes. We weren’t with Rocket for the 10th anniversary but we’re over the moon to be involved with the 20th. Congrats Rocket!”

For better or for worse, from behind the ironing board – an interview feature with Nevsky Perspective | Simon Gore