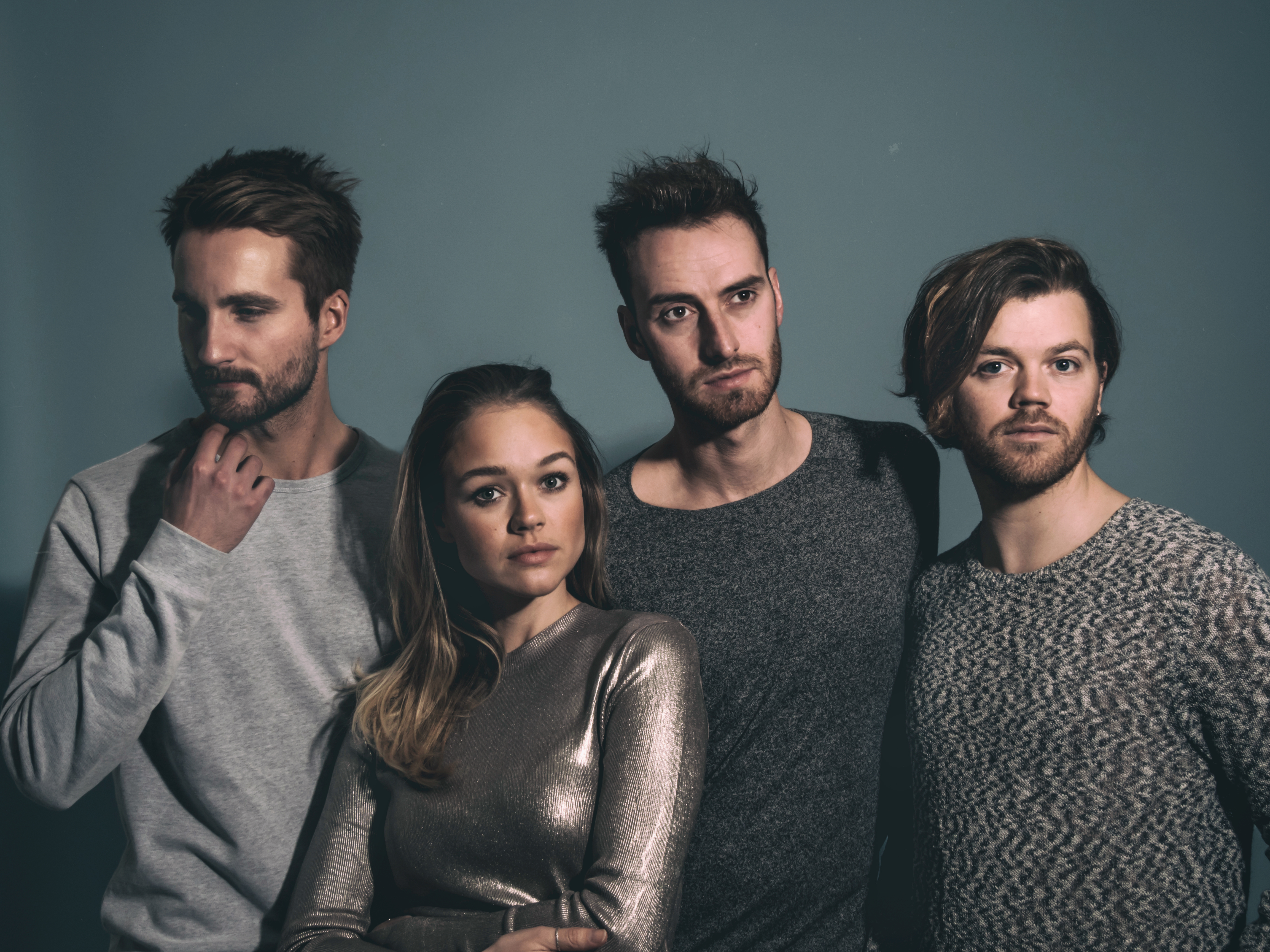 Ending 2017 On A High- Gavin Brown Interviews Circumnavigate
In October of last year, we first introduced you to the captivating sounds of Circumnavigate. The compelling vision of this dream-folk quartet has resulted in a remarkable 2017 for the band, with some incredible live shows under their belt and a release which would catapult the musicians into better opportunities. The quartet ended their year on such a high with the release of their stunning debut album When Worlds Collide, which was revealed to the world in December.
Sigrid (vocals/production) met Carl Frederik Kontny (piano/guitar/vocals) at school in Sandvika, Norway, where they would perform covers in school talent competitions. Sigrid later moved to London to study music and met Ross Craib (percussion/vocals) and Charlie Fowler (bass/vocals) through mutual friends. Between them, Circumnavigate have collectively played for some of London’s most respected artists including Foxes, Adam Lambert, Sigala, Romans, Gabrielle Aplin, Maverick Sabre and Crystal Fighters to name but a few.
Shortly after their album release, Gavin Brown spent some time with the band to find out what their promising year meant to them, their influences, creating such honest compositions, the reception of such a flawless debut and what they’re hoping to achieve for 2018.

We hand over to Gavin for this special interview….

How did Circumnavigate get together?

Carl and I (Sigrid) started playing together when we were fourteen basically covering Coldplay songs and writing jazzy folk songs along with our friend Jakob on trumpet. We kept exploring and writing together and had the odd gig now and then but it wasn’t until we met Ross & Charlie in London in 2013 that we became a band. That’s when we wrote and released our debut EP ‘Stranger’.

Who are some of the bands  musical influences and why?

Cinematic Orchestra, Thomas Dybdahl and Bon Iver are major influences to us. We like the way they approach songwriting and make some of the most beautiful, moving songs. We also take inspiration from film scores to create a mixture of what we think is both beautiful and emotive. (Ross/Sigrid)

Your music has been described as dream-folk. Do you think that is a fair description?

It’s a very nice description; we always struggled to explain our music to people as it crosses genres, but I think ‘dream-folk’ captures people’s imaginations and sets up our music pretty well. (Ross)

Your debut album When Worlds Collide is out now. Can you tell us a bit about the album?

The album is a collection of honest songs about finding connections, love and community with people from different backgrounds, cultures and countries. It’s a collection of songs written since we started together and includes a lot of different perspectives on life, love and friendships.

What was the vibe like in the studio when you were recording the album?

This album was actually created over 3 years, in a couple of different studios; essentially it’s a selection of the strongest songs from the band’s inception up to now. It’s all happened very organically and some of the songs came to life whilst in the studio  or even later; ‘Space in Between’ for example is one of the oldest songs and was originally shelved. We then revisited last year and fell in love with it all over again. In regards vibe, we are all great friends, so recording is a fun time for us, as with writing.

Another 20 Seconds is the first single from the album. What is the song about and is their any significance to the songs title?

The single was inspired by Sigrid’s reading of the romantic novel ‘Me Before You’ by Jojo Moyes. “The theme throughout is that longing to have more time with the one you love, even if just 20 seconds longer.
We actually wrote the song with the intention of pitching it to the movie adaptation, but we never finished it in time. Turns out we really enjoyed the creation and that is when it became the lead single from our debut album.”

What are some of the other songs on the album about?

The theme throughout is that of love & relationships, whether it be romantic or otherwise. For instance “Secret is about  a situation I ended up in a few years ago and also about being hopeful and open minded about love and connection.” (Sigrid)

What has the reaction to the album been like so far?

We’ve been very happy to hear lots of good feedback from fans, friends & industry and praise for attempting such a large debut album. So far the album has been listed on a few sites in the ‘top 20 of 2017’ which means the world to us!

You have released a beautiful video for the song Secret. Can you tell us a bit about the video and where it was filmed?

We have always loved 1-shot videos and nature, so we thought why not bring it all together for Secret. We shot it at sunrise in Richmond Park in London with a friend of ours called Max Benoist – he had filmed a one shot video of us before on a London gig and felt he’d be perfect to capture the simplicity and beauty relevant to the song.

How did your recent gig at the Sebright Arms go?

One of our best gigs of the year for sure; It felt so nice to play songs that people can finally find online.

Did you play all of the album live at the gig?

We played a selection of our favourites! Here’s our gig set list:

What other gigs have you played this year that have stuck in your memory?

We played ‘The Thief Unplugged’ festival in Oslo in the summer – it’s always one of our favourites!

How would you describe a Circumnavigate gig to someone who hasn’t seen you before?

We like to make our shows a bit of a musical and emotional journey. We incorporate a lot of the dynamics found in our records and tailor that to our live set…big crescendos, delicate lows to really pull on the heartstrings of the audience; we want them to come away feeling like they’ve felt something.

Will there be more live dates from the band in 2018?

Most definitely – we are currently in talks with a few Oslo venues to launch our album there too late January; Then we have our sets sight on the UK, which is all to be confirmed.

Members of the band have played with a wide range of artists from Foxes and Maverick Sabre to Crystal Fighters and Gabrielle Aplin. What was it like working with those artists and what did you learn from them?

It’s great! All the artists we have played with have definitely influenced what Circumnavigate is today; a lot of the time you become good friends and receive great advice and feedback on songwriting. You see the successes and the struggles and essentially learn a lot from being a close part of their team.

Who would Circumnavigate like to work with in the future?

We would love to collaborate with our influences such as Coldplay, Bon Iver and even great composers like Hans Zimmer and Ludivico Einaudi.

Can you tell us about being involved in the purposes of music to film for Hollywood films and what films you’ve been involved in?

Our music is very emotive with big cinematic crescendos and heartfelt lows, so naturally it fits quite well with motion picture; We have a great friend in Lisa Black, who runs Garnet Girl over in the US; she produces many feature length movies and is a long time supporter of the band. Our most recent collaboration was for Domenica Scorsese’s debut feature, Almost Paris, which is released on demand on the 9th January.

As the year draws to a close, what have been your highlights of 2017?

Of course we have to say releasing the album was an incredible feeling after 3/4 years of hard work, with ups and downs. It really brings it home as to why you started it all in the first place…and is completely worth it!
All of our gigs and all of the great reviews and testimonials from our fans and critics alike. 2017 was a great milestone for Circumnavigate.

Lots more activity! We locked ourselves away trying to push the album over the finish line, so now it’s complete, we plan on lots more writing, gigging and creativity.

What have been the best albums you’ve heard all year?

What bands & artists would you recommend for us to check out for the new year?

When Worlds Collides is out now and available to buy on iTunes and stream on Spotify. Physical copies are also available via the band’s Official Merch Store.