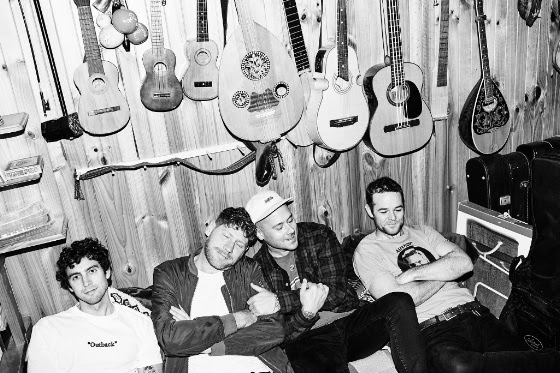 Sydney’s Food Court have announced the release of their debut album, Good Luck. Set for release on 27th April from Dine Alone Records, Food Court are the very first Australian band to sign to the esteemed label and release in their home territory, joining an impressive list of artists including the likes of Jimmy Eat World, Diarrhea Planet and The Dandy Warhols.

With Food Court’s long-awaited debut long-player this band of brothers reverted to the way things used to be done; laying down 11 killer cuts in less than a week – all recorded live and under the masterful ear of producer John Castle. It seemed fitting that Good Luck would be the final album ever recorded in the legendary Shed Studios – where Castle worked his magic on records from the likes of You Am I, Vance Joy, The Bamboos and more recently Jack River. Glorious 2 and a half minute slices of rock and roll such as “Not My Way” and “Slightest Brightest” sit comfortably amongst some of Castle’s best work – all inner-city attitude and sharp guitars.

While the album was recorded in a week, Food Court worked on the songs over the past year and the result is a classic debut – a scrapbook of stories of lost loves, lost sleep, mistakes, anxious minds and a light drizzling of optimism on top. The album is powered through melody-driven garage punk and performance chops which were finely tuned on their inaugural SXSW appearance and touring through the US and Canada.

In the words of Food Court’s Cristian Campano, ”Good Luck is all about making the right choice even after you’ve made a few wrong choices.” And while fans of the band’s first two DIY EPs will still find their trademark cheeky irreverence very much intact, Campano elaborates, ”Overall we wanted to write songs that were louder, rawer, and straighter to the point than we had previously before.”

Food Court’s Good Luck LP will be available from Dine Alone Records on 27th April. It is now available to pre-order here.