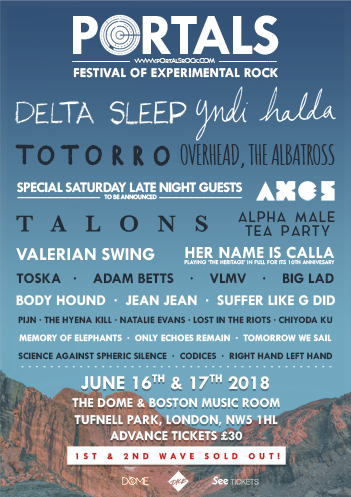 Delta Sleep, Overhead The Albatross, Toska and more announced for Portals Festival.
Portals Festival is fast becoming a key event in the experimental rock calendar. The latest announcement features an additional 11 artists from the experimental rock scene in the UK and across Europe.
Headlining the Saturday night will be math-rock heroes Delta Sleep (Big Scary Monsters) who will showcase material from their upcoming 2nd album.
Delta Sleep combine guitar driven melodies, held together by jazz influenced percussion and relentless bass, topped with sprinkles of left-field electronica. The band have been described as “an enchanted battle between At The Drive-In and Mogwai for the City of Radiohead in the land of Battles”.
Delta Sleep perform ‘Strogthany’ Live at The Haunt
Taking to the main stage just before yndi halda on the Sunday night, in a rare UK performance, will be Dublin’s post-rock icons Overhead, The Albatross. The band go far beyond the conventions of post-rock: layered strings, spacious electronics, soaring guitars and powerful drums combine to create a unique journey in a live music setting.
Their set at Portals will be the band’s first London gig since 2015 when they supported God Is An Astronaut at the Islington Academy.
Overhead, The Albatross – Big River Man
The announcement is completed by French electronic-math trio Jean Jean, Brighton’s Toska, a solo set from Three Trapped Tigers’ drummer Adam Betts, as well as Chiyoda Ku, Memory of Elephants, Science Against Spheric Silence (FR), Only Echoes Remain, Codices and Right Hand Left Hand.
The lineup will be completed by some very special guests performing on Saturday in The Dome (main stage), plus a series of DJs who playing the Saturday night afterparty until 3am in the Boston Music Room.
Portals Director and Band Booker Asher Kenton comments on the (almost completed) lineup:
“Whilst Portals have been doing all-dayers and gigs for a while now we thought we’d have a stab at doing a 2-day festival, as no-one has done it before in London. Never in a million years did I think we’d manage to get a whole heap of our very favourite bands all playing in year one of the festival. After a lot of hard work, the lineup is fully booked and we can’t wait for the festival to start!”
Website: https://portalsrock.com/festival/
Facebook: https://www.facebook.com/events/554865138182430/
Ticket Link: https://www.seetickets.com/event/portals-festival/the-dome-and-the-boston-music-rooms/1184817