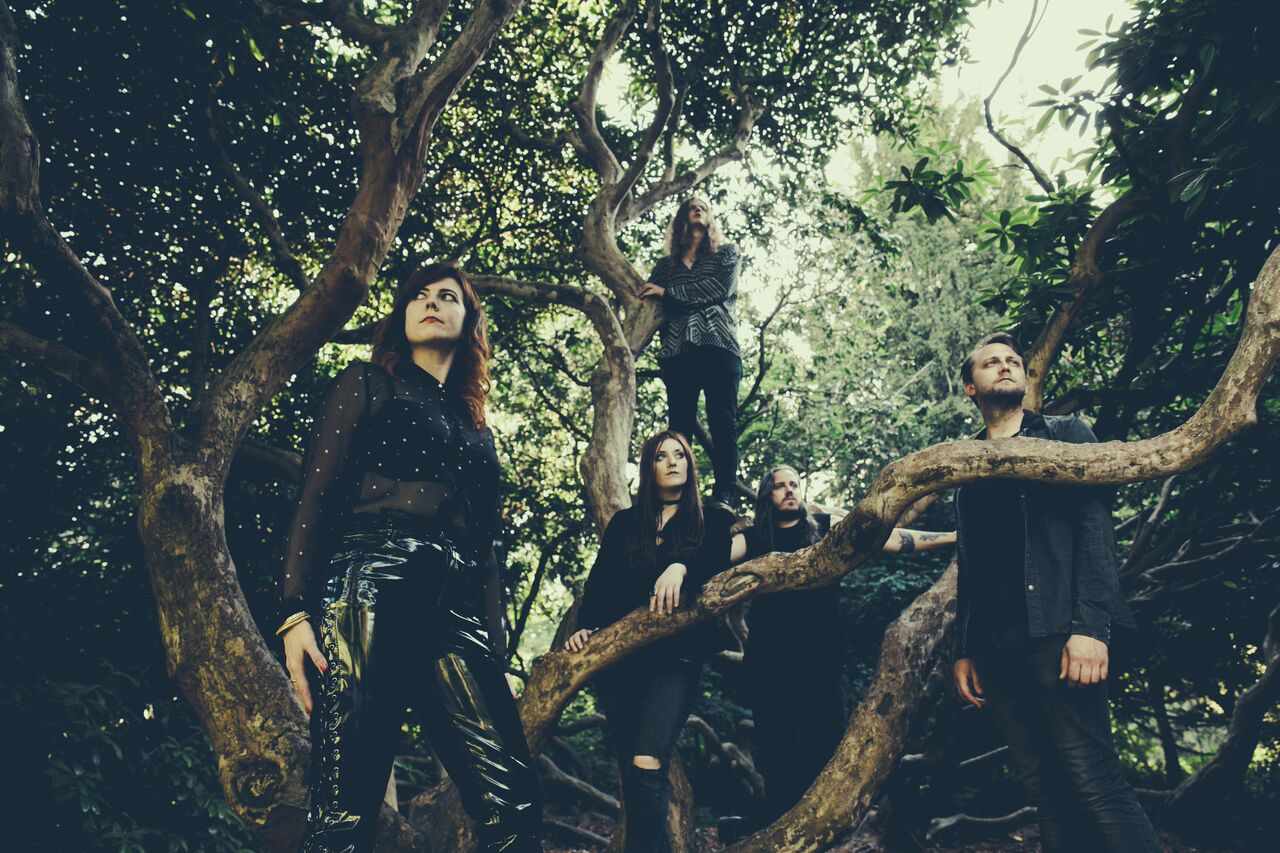 Following this month’s UK tour, Black Moth have shared a new video for the track ‘Sisters of The Stone’, described by vocalist Harriet Hyde as ‘an anthem for wronged women’. The video by Noomi Spook, ‘depicts glimpses of female power, lovingly hunted and excavated from the swathes of old footage of the Stepford Wives advertising domestic bliss to dead-eyed sex dolls selling automobiles. Noomi paints a picture of the wild woman in all us’, adds Harriet. Watch here:

While their first 2 albums were released by New Heavy Sounds, Black Moth will have their latest / third studio album issued worldwide via Candlelight Records on March 2nd 2018, the result of an alliance between Candlelight and NHS.
Produced by Andy Hawkins (Hawk Eyes, Maximo Park) with Russ Russell (Napalm Death, Dimmu Borgir) handling the mix, this 10-track affair sees the Leeds / London outfit – vocalist Harriet Hyde, guitarists Jim Swainston & Federica Gialanze’, bassist Dave Vachon and drummer Dom McCready –  further honing the various elements of their sound to make the hooks more barbed and the focus more collective.
What’s for sure is that ‘Anatomical Venus’ is the heaviest Black Moth album to date, taking the signature Mothic sound – a dark and heady swirl of garage rock, mind-blowin’ psychedelia and amplified over-drive – down a more targetted path, effectively opening a new chapter in a career that stretches back to an inaugural single in 2010 and a debut album, ‘The Killing Jar’, in 2012.
For ‘The Killing Jar’ and its 2014 follow-up, ‘Condemned To Hope’, the band brought in Jim Sclavunos (a member of Nick Cave and the Bad Seeds since 1994) to handle production and mixing duties, and the results immediately connected with fans and media alike…
“Like Electric Wizard meets Band Of Skulls, in a dungeon” is one press description that sticks in the mind, with other points of reference including Black Sabbath, the Stooges, PJ Harvey, Melvins, Kyuss and Patti Smith; however, with ‘Anatomical Venus’ Black Moth are seeking to forge their own path, both musically and conceptually.
Pre-order now on CD, vinyl and digital along with exclusive bundles –  https://candlelightrecords.lnk.to/anatomicalvenus

On the live front, Black Moth have appeared at a number of high-profile UK festivals (including Download, Reading & Leeds and Bloodstock Open Air), and guested – in the UK and Europe – with artists such as L7, Uncle Acid and The Deadbeats and The Sisters Of Mercy

The band are set to appear at London’s Desert Fest on 4th May.
‘They draw you in with sensual tones and whisper words of horror into your welcoming embrace’  – Metal Hammer
‘Refreshing’ – Q Magazine
‘Utterly, unstoppable stuff’–  Kerrang
‘Best album yet’ – Mojo
‘Polished and technical but never lacking intensity’ – NME
‘Black Moth is heavy with tunefulness. That is really rare these days. Anatomical Venus is the bonus pack, you get both!’ – Donita Sparks (L7)
‘If you’re searching for a soundtrack to these dog-end winter months, look no further’ – Planet Rock Magazine
‘Never ponderous, always engaging, this is doom you can put on when your non-metalhead mates around and when the world starts to end’ – Drowned in Sound
‘West Yorks’ premier garage-sleaze-doom-grunge sludge-metallers’ – Classic Rock
‘Sabbath infused sludge with a strong female vocal presence that will undoubtedly destroy eardrums and teeth during the course of their upcoming live shows’ – The 405
facebook.com/themothpit