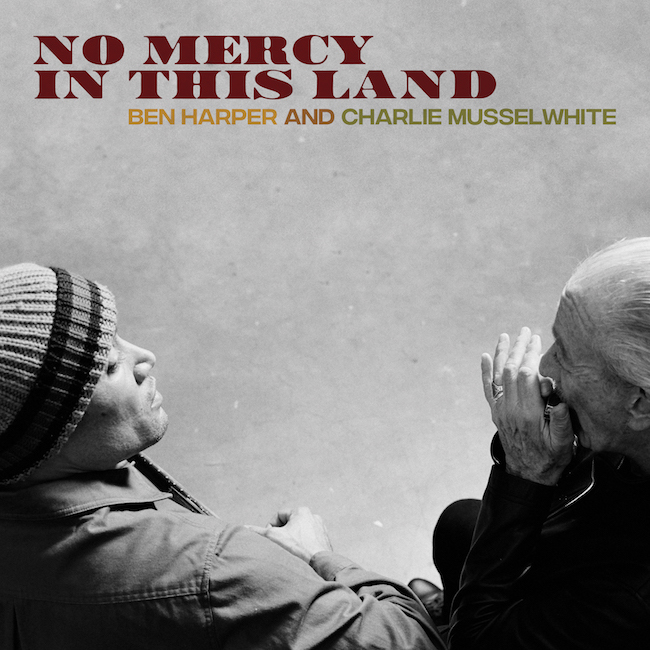 BEN HARPER AND CHARLIE MUSSELWHITE RELEASE LIVELY NEW SINGLE ‘FOUND THE ONE’ FROM FORTHCOMING ALBUM ‘NO MERCY IN THIS LAND
‘NO MERCY IN THIS LAND’ SET FOR RELEASE 30 MARCH
UK TOUR ANNOUNCED
TICKETS ON SALE NOW
“The duo creates a thrilling performance that melds Harper’s unique slide guitar with Musselwhite’s signature harmonica along both of their purely soulful vocal deliveries.” Billboard
Gearing up for the 30th March release of ‘No Mercy in This Land’, GRAMMY-Award winning artists BEN HARPER and CHARLIE MUSSELWHITE share a new track from the forthcoming album entitled “Found the One.”  Dancing along to a bouncing, Bo Diddley-esque beat, the track is a jubilant and euphoric expression of love, with Ben singing of his luck in finding “the one.”  ‘Found the One’ further showcases the range of emotional depth fans can expect from the album, as it promises to take listeners on a sonic journey through Ben and Charlie’s personal stories of survival. ‘No Mercy in This Land’ is available for preorder now at www.NoMercyInThisLand.com and will include an IG download of ‘Found the One’.
Found The One’ is a song about never giving up on finding true love. It’s a song about surrendering to love, getting out of loves way, and letting love do the heavy lifting,” Harper says of the track. “It was also the one song written in the studio during the recording process of the record – Jason Mozersky started hammering out the main riff on guitar and Jimmy Paxson started coming up with this very unique drum pattern using his drum set along with, of all things, a metal trash can! So the two of them started making a wonderful racket and I immediately jumped out from behind the board. Right away, I knew we had to chase this idea down.”

The pair will celebrate the album’s release on March 30th by kicking off an international tour that same evening in San Francisco, CA at the famed Fillmore before heading overseas for a string of European dates. The duo will make it to the UK in April to play three shows: