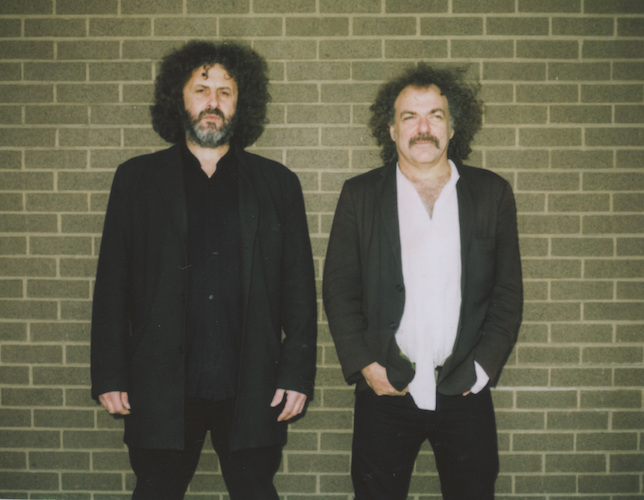 Xylouris White share their new single “Daphne” on Stereogum. The track that was originally written in the 1990’s after Jim and George first was described by Stereogum as “a moody, hypnotic meditation that gradually builds to a thunderous climax”. Listen to the track now …

Just 15 well-toured months later, the duo’s exploratory instincts drive them further onwards still on their third album, Mother, released 19th January on Bella Union, and named to denote “new life”. As Xylouris puts it, “Mother is the extension of Goats and Black Peak. Three things, all part of a whole. Goats are mothers, Zeus was raised on Amaltheia’s milk, Black Peak is Mother Earth… Mother Earth is the mother of everything.”

The duo have previously shared a first track from the album titled “Only Love”, which is streaming HERE.

That ongoing gestation is a remarkable extension of already remarkable back-stories. Xylouris is a scion of one of Greece’s most revered musical families. His fatherXylouris White share new single “Daphne” // Announce US tour in February 2018 // Third album “Mother” released 19th January on Bella Union is legendary singer and lyra player Psarantonis. Jim White, meanwhile, has commanded international attention for more than two decades as part of Australia’s Dirty Three. Now New York-based, White has often been called on to collaborate with numerous alt-A-listers (including: Bonnie ‘Prince’ Billy, PJ Harvey, Cat Power and Smog), where he redeploys the rolling momentum of free-jazz to variously supple, sensitive and seismic ends. Most recently he performed with Kurt Vile and Courtney Barnett on their acclaimed album “Lotta Sea Lice”.

Album opener “In Medias Res” finds the duo already in motion, feeling their way around one another, seeking out ways to bring a song to full bloom. Proving they can also be thrillingly direct when the mood takes them, “Only Love” follows with a brilliantly barrelling sense of momentum, White’s powerhouse percussion urgingXylouris’s liquid-fingered lute-playing and impassioned baritone on to increasing heights of urgency.

From here, Xylouris White proceed as if by intuition, feeling their way around new terrain. “Motorcycle Kondilies” is muscular and epic, White’s rimshots providing on-alert accompaniment as Xylouris’s reaching vocal and dancing lute lines build in intensity. If the marching rhythm and pretty lute melody of “Spud’s Garden” highlights the duo’s occasional elegant side, “Daphne” and “Achilles Heel” showcase Xylouris White’s at their most hypnotic and brooding. “Woman from Anogeia” hosts a particularly emotive vocal from Xylouris; “Call and Response” is the duo at their freeform finest, circling each other querulously, again teasing at possibility. Finally, resolution is embraced openly on the tactile and reverberant “Lullaby”, as lovely a track as any Xylouris White have birthed.

Mother will be released 19th January on Bella Union. To celebrate the release they will be hitting the road on the following US tour dates next year: