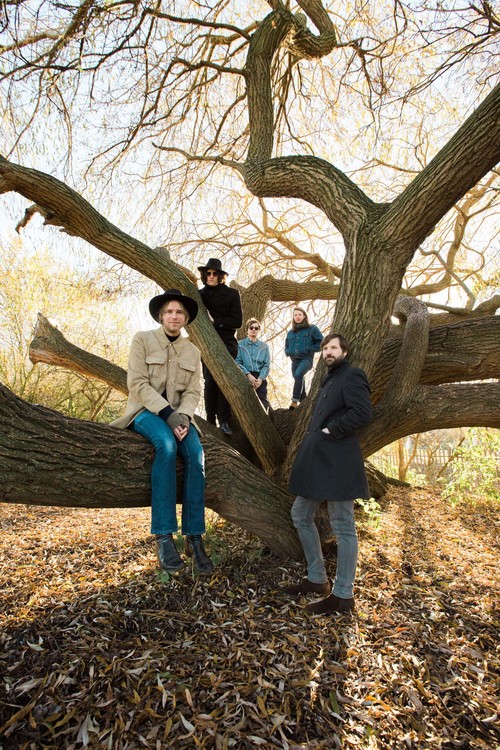 The Hanging Stars
Share new single “On A Sweet Summer’s Day”
Taken from their forthcoming album Songs For Somewhere Else
Due out on 9 February 2018 via Crimson Crow
“On A Sweet Summer’s Day” is the new single to be taken from cosmic folk outfit The Hanging Stars’ forthcoming album Songs For Somewhere Else, due out on 9 February 2018. The band have also announced some live dates, including a London album launch at The Victoria in Hackney on 22 February.
Premiered via The Big Takeover, “On A Sweet Summer’s Day” a laconic, hazy joy of a track offering gorgeous four-part-harmonies and luscious twelve-string guitars. An early glimpse of sundrenched days, the music washes over like a cool breeze, whilst the lyrics hint at a moment of reflection filled with pensive melancholia.
The song is a joint writing effort between Samuel Ferman and Richard Olson, with Olson writing the words whilst on a trip to Toronto. Channeling the sounds of The Byrds, Big Star and The Flying Burrito Brothers, as well as hints of Mojave 3 and The Allah Las, they mainline the dying embers of the early 70s psychedelic folk and cosmic country scenes.
In addition to songwriter, singer and guitarist Richard Olson (The See See, Eighteenth Day of May) and Samuel Ferman on bass, The Hanging Stars comprise Paulie Cobra on drums, Patrick Ralla (Alan Tyler Show, Edwyn Collins) on guitars, keys and vocals, and Joe Harvey-Whyte (pedal steel, dobro).
Recording was conducted at the legendary Bark Studios in Walthamstow with Brian O’Shaughnessey (The Clientele, Primal Scream, My Bloody Valentine) at the helm. They had a collective attitude to performances on the album, with additional input from US friends Collin Hegna (Federale, Brian Jonestown Massacre), Miranda Lee Richards (on the emotive duet “How I Got This Way”), and Christof Certik (Brian Jonestown Massacre, Winter Flowers), as well as Alison Cotton on viola (Left Outsides, Eighteenth Day Of May), Luke Barlow (Nought) on flute and Thomas Wake on clarinet.
The Hanging Stars’ 2016 debut Over The Silvery Lake, received praise from The Times, who described it as; “An album with enough of a hazy, sun-dappled charm to make the capital’s dreariest weather bearable”, as well as Uncut, who proclaimed that it was; “a promising debut from London’s The Hanging Stars, who switch deftly between deliciously sentimental Americana and swaggering psychedelia”. They picked up a good amount of support at Radio 2 and 6 Music, with lead single “The House on the Hill” scoring a much-coveted 10/10 by John Robb on Steve Lamacq’s Roundtable.
The recording for Songs For Somewhere Else began before the release of Over the Silvery Lake and captures the development of a band who had toured Europe in the winter of 2015/16, and went on to play coveted support slots with Teenage Fanclub, The Clientele, Wolf People and GospelbeacH, as well as Liverpool’s International Festival of Psychedelia.
The Hanging Stars usher the next phase of their musical development, with Olson’s astute lyrical observations and honeyed vocals at the fore, backed by the band’s creative musical arrangements. These aren’t just songs for somewhere else, they are songs for right here and right now. The perfect timeless antidote to these troubling times.
Forthcoming live dates:
Feb 22nd – London – Victoria
March 3rd – Todmorden – Golden Lion
April 8th – High Wycombe – Ramblin’ Roots Revue
(more dates tba)