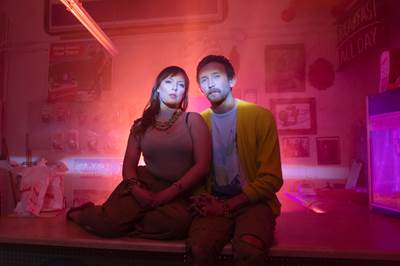 PLAY ALL POINTS EAST FESTIVAL IN MAY

Hot off the back of their nomination for best Dance/Electronic album at the GRAMMY®s, today Sylvan Esso reveal their brand new single ‘PARAD(w/m)E’. Listen here: https://SylvanEsso.lnk.to/PWMLYRICPR .

The track was debuted with a performance on Jimmy Kimmel last night, and follows their critically acclaimed second album ‘What Now’, which was released on Loma Vista/Caroline International in 2017. The band will be playing their only UK show of 2018 in May, at All Points East festival in London, supporting Bjork.

With a pulsating synth arrangement juxtaposed with Amelia’s cut-glass vocals, ‘PARAD(w/m)E’ is an intoxicating blend of musical influences and astute lyricism and proves that Sylvan Esso are at the top of their game. With a GRAMMY® nomination now under their belts, the band continue to evolve sonically and lyrically, and position themselves at the helm of pioneering pop.

Sylvan Esso’s second album, What Now, is the sound of a band truly fulfilling the potential and promise of their debut. Everything has evolved – the production is bolder, the vocals are more intense, the melodies are more irresistible, and the songs shine that much brighter. However, it is also a record that was made in 2016 – which means it is inherently grappling with the chaos of a country coming undone, the voices of two people nestled in studios around the country who were bemused by what they looked out and saw. It’s an album that is both political and personal, and blurs the line between the two – What Now describes the inevitable low that comes after every high, fulfilment tempered by the knowledge that there is no clearly defined conclusion. It’s a record about falling in love and learning that it won’t save you; about the over sharing of information and the fine line between self-awareness and narcissism; about meeting one’s own personal successes but feeling the fizzling embers of the afterglow rather than the roar of achievement; about the crushing realisation that no progress can ever feel permanent. It is an album that finds its strength in its own duality. But at its core, What Now is an album of the finest songs this band has ever written- produced masterfully, sang fearlessly- to articulate our collective undercurrents of anxiety and joy.