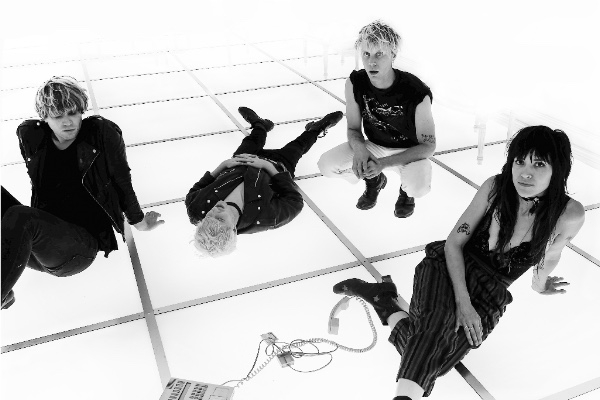 Ahead of first ever UK tour which starts this week, Sextile have shared a new single and accompanying lyric video titled “Current Affair”. It’s their first new music since 2017’s album ‘Albeit Living’, which was released via Felte in July.

The politically charged new track features guest vocals from actress and friend of the band Sienna Scarritt, who explains: “The song addresses the regression of our (America) nation. It’s a backwards motion, a lapse happening in front of our eyes – happening fast”.  She adds: “The song is a verbal refusal of getting caught in this current of delusion. It’s a plea to the world to wake up”.

Sextile have become a stable fixture in the Los Angeles underground over recent years and have been gaining a devout following since their inception in 2015. The band boldly throw convention out of the window to create and genre-bending imprint that combines the raw energy of 70’s punk with the intricate and sophisticated structural elements of 80’s post-punk and synth-wave. Their second record, ‘Albeit Living’ is a politically charged, introspective album of impassioned observations on our world today.

The classical astrology meaning of a Sextile is that the powers involved cooperate smoothly, so that they encourage and inspire one another, so both sides of the Sextile gain by the aspect between them. This mutual stimulation is usually very creative and harmonious.