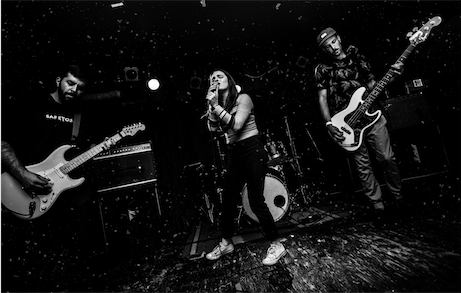 Canadian indie-rock band Pine has partnered with SubstreamMagazine.com  to premiere a new video for their single “Jilt.” The track is featured on the band’s critically acclaimed, latest EP, Pillow Talk, which is out now from No Sleep Records.

“”Jilt,” where Pillow Talk derives its name, is about trying to obtain the intimacy you need in a relationship that’s fighting the balance between love and dreams. The video tries to emulate the feeling of a lover shut off from the relationship, holding a loss of love and intimacy beside them, seemingly unable to radiate the love needed.” – Pine
“Pillow Talk is sure to be a favorite from the genre and is sure to sustain the band
as one of the most important acts to follow in the future.” – SubstreamMagazine.com
PINE began as a vehicle for expressive, personal story-telling and emotionality, and though the textures they play with continue to evolve in vibrant and adventurous ways, that emotive heart still pulses with the same blood. Love, loss, and heartache ranging from the mundane to the existential, figure in music that grows from the fertile soil of shoegaze, post-rock, post-punk and more. The artistic chemistry between them is palpable in their most recent recordings and is a truly visceral force in their live show. Their intuitive use of various effects and their expressive range in dynamics is transportive, possibly even transcendent. At the same time, no matter how much volume and/or reverb is at work, it never overpowers. Balancing mood with melody, texture with soul, PINE’s live show continues to win over audiences wherever their van can take them.
Purchase/Stream Pillow Talk:
Apple Music – https://apple.co/2DWYqbI
Amazon – http://amzn.to/2G4Qgic
Spotify – http://spoti.fi/2mZN4vr
No Sleep – http://store.nosleeprecords.com/catalogs/pine
BandCamp – http://pineband.com/album/pillow-talk
For More Information:
http://pineband.com/
https://www.facebook.com/613PINE/