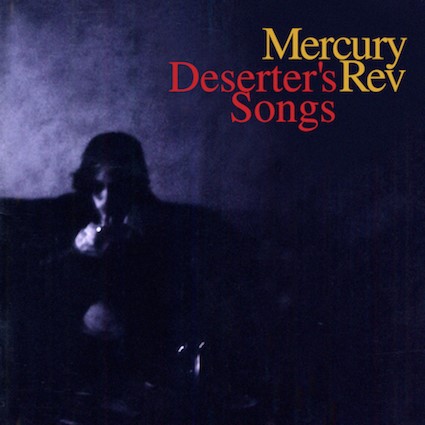 To celebrate the 20th anniversary of their classic album Deserter’s Songs, Mercury Rev have announced news of an intimate, acoustic European tour with particular focus on towns in Ireland and Scotland in which they’ve rarely performed. “Deserter’s Songs” was released to huge worldwide acclaim in 1998 and went on to be named album of the year by NME, MOJO and many other publications. The record merged jazz, folk and 60s rock with Disney soundtrack fantasia and heralded Mercury Rev’s rebirth as purveyors of a cosmic brand of the popular American songbook. “Deserter’s Songs” was also a bona-fide hit, generating three Top 40 singles in the form of “Goddess on a Hiway”, “Holes” and “Opus 40”.

For these shows, Mercury Rev will perform the songs in the fragile “whisper and strum” that they were originally written and promises to be an extraordinary glimpse into the forces that nearly destroyed a band and the strange events leading toward a most unexpected return. Dates/info below:
Saturday 14th April – GENK – Little Waves Festival tickets
Monday 16th April – BANGOR – Wesley Centenary Church **(SOLD OUT!)**
Tuesday 17th April – BANGOR – Wesley Centenary Church **(SOLD OUT!)**
Wednesday 18th April – LIMERICK – Dolans Warehouse tickets
Thursday 19th April – WATERFORD – Theatre Royal tickets
Friday 20th April – CORK – Live at St Luke’s tickets
Saturday 21st April – GALWAY – Roisin Dubh tickets
Sunday 22nd April – DUBLIN – Whelans **(SOLD OUT!)**
Tuesday 24th April – STIRLING – The Tolbooth tickets
Wednesday 25th April – EDINBURGH – The Caves tickets
Thursday 26th April – ABERDEEN – Tunnels tickets
Friday 27th April – GLASGOW – CCA tickets
Sunday 29th April – COPENHAGEN – Hotel Cecil **(SOLD OUT!)**
Sunday 29th April – COPENHAGEN – Hotel Cecil tickets
Tuesday 1st May – STOCKHOLM – Fasching tickets
Wednesday 2nd May – OSLO – John Dee **(SOLD OUT!)**
Personal statement from Jonathan Donahue:
“By the time we began to surface following the destruction of the mid 90’s there was no longer anyone of the band ‘in the band’. It felt as though Grasshopper and I were just these two see-through phantoms banging around at night in my attic, bumping into a melody here and there, strumming on the last of my guitars not in hock, pressing pray and record on the old 8 Track reel to reel.

We had no management, no label, no money and to be completely honest, no one clamoring for a new Rev album anywhere in the world. In fact, on the 2″ tapes during the late recordings Dave Fridmann didn’t write Mercury Rev and instead he used the name Harmony Rockets, a recent experimental side project of ours. The way we saw it, Deserter’s wasn’t going to be our next album… it was going to be our last. And likely only released on cassette to our friends… In fact, the only copy i’ve kept of Deserter’s Songs from that time is on cassette.

If anything, these upcoming live shows are by far the closest in spirit and nature to the original writing of that time. Near silent, apprehensive, fragile to the point of ‘touch it and it turns to dust’. So full of self-doubt. The melancholy many hear on the album went in to album from the start, maybe long before it. Like from a mother to her unborn child, sadness and bewilderment just poured out us and into the album like an open cup.”