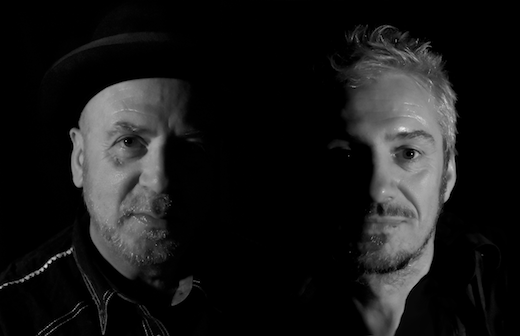 Following many excellent reviews for the debut album Ojalá, released in November on Bella Union, Lost Horizons have shared a new instrumental track entitled “On The Day You Died” which is streaming HERE and available on all digital services now.
Previously only available via the Rough Trade Album Club on a limited 4 track bonus cd, the track, improvised on the morning of David Bowie’s untimely death, is their simple paen to his genius, shared today on this the second anniversary since his passing.

Lost Horizons’ Simon Raymonde and Richie Thomas almost didn’t make it to studio that day two years ago as the sadness and upset at the news hit them, but they decided to forge ahead and try and use all the energy and his inspiration to create something. Of the track Raymonde says: “It was a tough day, but quite an extraordinary one in hindsight. I wasn’t sure if I’d be able to do anything when I arrived at the studio, but when I sat at the piano something just happened. Richie grabbed his saxophone and our engineer Iggy just pressed record and the resulting improvisation is what you hear, warts and all. We didn’t talk much about it, but I can feel his presence on the track for sure. Several months later when I told Richie I wanted to use the track exactly as it was, he was quite surprised and said that he could play the saxophone much better now, and that he’d like to have another go. “Not a chance!”  I said. “It may not be ‘perfect’ technically but the reason it has the poignancy it does is because of the circumstances. I don’t want you to change a note.” Thankfully, he agreed…”

Back in November Lost Horizons shared a video for the track “Score The Sky”, featuring vocals from The Duke Spirit’s Liela Moss. Click HERE to watch.

Lost Horizons is the new musical project of former–Cocteau Twin and Bella Union boss Simon Raymonde and Richie Thomas of early 4AD figureheads Dif Juz. Their debut album Ojalá incorporates a heady cast of guest singers. Some are signed to Bella Union, such as Marissa Nadler and former Midlake frontman Tim Smith, while others are long-time favourites of Raymonde’s (Leila Moss of The Duke Spirit and Ghostpoet), or newer discoveries (Beth Cannon, Hilang Child, Gemma Dunleavy and Phil McDonnell). Together, the Lost Horizons ensemble has created an hour of exquisite, expansive and diverse spellcasting.