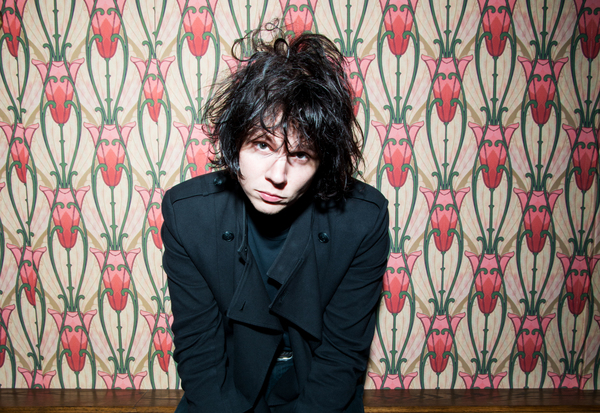 Kyle Craft’s rollicking rock’n’roll delight of a record, Full Circle Nightmare is now streaming its entirety worldwide through NPR Music’s “First Listen.”   NPR Music’s Jason Heller had this to say of the album, “Craft may be a wordsmith at heart, but he doesn’t shirk on making Full Circle punchy and infectious on a strictly musical level. The folky sway and hushed tone of “Slick & Delta Queen” demand undivided attention, thanks to Craft’s cracked voice, gentle strumming, and euphoric choruses. “Fake Magic Angel” revs up a twangy hootenanny of Dylan-worthy Americana, only delivered with the slashing force of Bowie-era glam. And the piano-laden “Gold Calf Moan” is a ballad of lost — but hopefully one day recaptured — love that dissolves and reshapes itself around Craft’s entrancing troubadour spell… [His] moonstruck sentiments may seem downright old-fashioned. Then again, so are his compositions: unabashed odes to courtship, confusion and the timeless power of storytelling in song.”(see “First Listen” January 25th)
Full Circle Nightmare was produced by Chris Funk (of the Decemberists), with mixing by Trevor Spencer (Father John Misty) and Benjamin Weikel and Brandon Summers (of The Helio Sequence).
The album traverses all the different nuances of rock’n’roll; it’s a timeless piece that could exist in any of the past five decades. It evokes a never-ending night out in a sweaty saloon bar: bottomless rounds, endless packs of cigarettes and hours dancing to the jukebox.
The album is the follow up to Dolls of Highland, his acclaimed debut.   Full Circle Nightmare is available for preorder now from Sub Pop and select independent retailers [link here].
What people are saying about Kyle Craft’s Full Circle Nightmare:
“Flamboyant 10-track foray into 70’s rock, channeling the spirit of Elton John on tracks like the groovey, Kiss-like rocker “Belmont (One-Trick Pony)” and the magnificently dramatic “Heartbreak Junky”, which highlights the album’s central theme of failed love affairs.” [album review] – Uncut
“…A rollicking, densely-arranged rock’n’roll and country originals album with something of Jack White’s crazed vocal delivery…” [album review] – MOJO
“When Kyle Craft’s heart breaks, it shoots glitter and confetti—by the time he hits the chorus, the song has erupted into a tempest of sassy brass, swirling organs, and hip-swiveling boogie.”  [“Heartbreak Junky”] – Pitchfork
“A timeless piece of vintage songwriting in the spirit of Chilton and Dylan…It is much like it’s creator; cheery, self-assured, a bit bizarre, slightly comedic, and utterly genius.”utterly genius.” [“Exile Rag”] – The Line of Best Fit
“Full Circle Nightmare has the retro-analog feel of an album that could have been released in 1972, sandwiched between Bowie’s The Rise and Fall of Ziggy Stardust and the Spiders from Mars and Harry Nilsson’s Nilsson Schmilsson.” [Feature] – Pop Matters
”A tragic heartbreaker of a tune and the official music video shines as well.” [“The Rager”] – AU Review
”Craft’s sophomore effort with Sub Pop continues the momentum of his excellent debut, Dolls Of Highland. His glam rock / power pop has an observational quality to it that makes that much more enjoyable.” [“Heartbreak Junky”]  – Hear Ya
”Hyper-quirky, Marc Bolan-VS-John Fogerty, southern gothic space rock.”[“Heartbreak Junky”]  – Tiny Mix Tapes