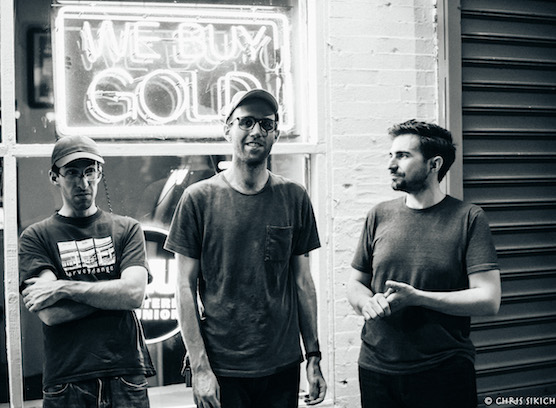 Every Little Thought  Out February 23rd
on Lame-O Records

Philadelphia’s Hurry have just released their new single “Every Little Thought,” streaming now via NPR Music. NPR calls Hurry’s music “sweetness that is more subtle, like a hint of rosewater in tea cakes.” The band’s new record Every Little Thought is set to be released on February 23rd via Lame-O Records. Hurry has also recently released a music video “Waiting For You” which can be seen via Uproxx. Pre-orders for Every Little Thought are available now physically and digitally via Lame-O Records.
Hear Hurry’s new single “Every Little Thought” via NPR Music.
Hurry will be playing the Every Little Thought record release show on February 24th at Everybody Hits in Philadelphia. Amanda X and Worriers will be opening the show.
What was once a solo project for principal songwriter Matt Scottoline has evolved into Hurry, a power pop trio from Philadelphia, Pennsylvania composed of Scottoline, Rob DeCarolis (Univox), and Joe DeCarolis (Psychic Teens). The DeCarolises are cousins and they are both very talented. “As talented as Matt Scottoline?” Of course. Please don’t attempt to pry the band apart with potentially hurtful questions.Hurry’s new album, Every Little Thought, will be released on February 23, 2018 on Lame-O Records. The album, written by Scottoline, is a light and dreamy plunge into life’s crushingly relentless uncertainty and doubt. The album is more pop-driven than Hurry’s previous efforts, focusing on catchy melodies, hooks, and harmonies influenced by Teenage Fanclub, Robyn Hitchcock, Yo La Tengo, and Guided By Voices. Of the new album, Scottoline — a natural salesman — says, “I tried even harder this time to make it good.”