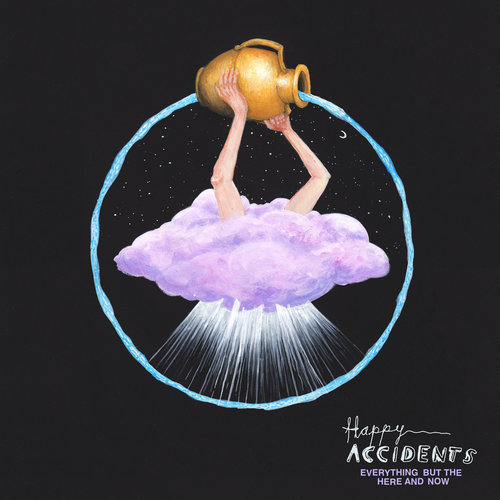 Everything But The Here And Now

Happy Accidents play songs that take influence from lowkey and optimistic, lo-fi indie and a rawer DIY punk sound and these two elements meld together to create music that can only be described as joyous and if you add in a sprinkling of vivacity and a whole dollop of melody, you have the music of Happy Accidents.

The bands new album Everything But The Here And Now is a blast of energy with songs that will be stuck in your head for months after you initially hear them.

This new album takes on the elements of their debut album You Might Be Right but cranks them up with that crackling punk energy and its inevitable lust for life. Introspective tales of modern life are the order of the day here and they are delivered so enthusiastically that you can’t help but feel empowered by their energetic nature and one listen to tracks like A Better Plan and Text Me When You’re Home confirms this as such.

From the initial igniting blast of Nunhead, a great start to the album and one that is a perfect example of what Happy Accidents are doing musically, the album takes on all sorts of relatable twists and turns but all of the tracks on here are anchored in a sense of realism but realism that is delivered with that gleeful optimism. Songs on the album like A Better Plan and Different Views combine lush harmonies with zesty energy while a song like the sublime Float acts as almost a perfect interlude to that energy with its laid back nature.

Dual vocals on here from band members Rich (who also acts as the bands guitarist) and Phoebe (who also drums and does lead vocals for the first time in this album and does a brilliant job) work well, especially on a song like Free Time where their voices seem to bounce off each other resulting in an enjoyable listening experience. Musically, their guitar and percussion sound works well with the bass sound of Neil which melds everything together in fine style and creates a jaunty bed of sound for the vocals to glide over.

Everything But The Here And Now is an album that works well, sounds great and is full of catchy and melodic songs that are hopeful while retaining just the right amount of reflection and is an album that you will get swept up in without realising in the most positive way.

New Album Everything But The Here And Now  Set For Release 16th February 2018 via Alcopop! Records