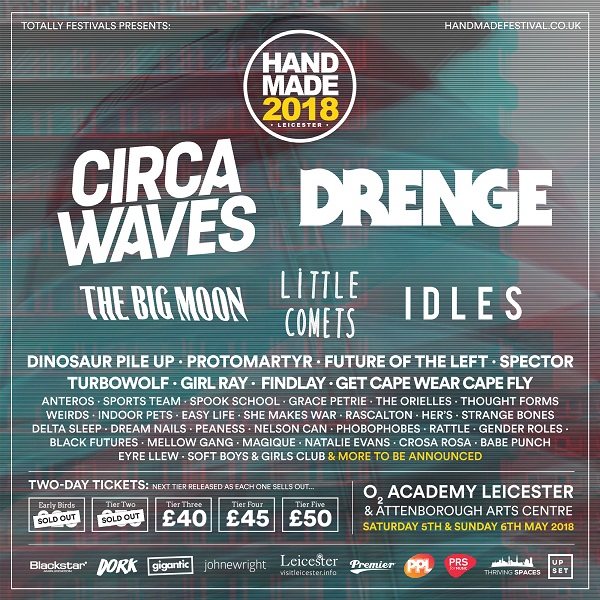 Handmade Festival will be returning to Leicester’s O2 Academy in 2018 for two days of the finest music, comedy, art, film, performance and photography, hand-picked and carefully curated. The festival will take place on 5th & 6th May 2018.

Last month, Handmade Festival announced the first wave of bands for the 2018 music programme, and now they are thrilled to announce the new line-up additions with the second wave of bands. The full line-up so far is as follows:

Alongside the new announcements, Handmade Festival have also announced that they will be partnering with PPL and PRS for Music once again to host the second stage at the festival. Speaking about their partnership with the festival Peter Leathem, PPL’s Chief Executive commented:“Handmade Festival is one of the leading lights in the UK’s boutique festival scene and we are delighted to be able to support it for the second year running in 2018. Last year’s event was a stellar success and as our new joint venture PPL PRS Ltd launches in Leicester, we look forward to being involved once again in one of the city’s principal music and arts festivals”.

Similarly, Tim Arber, Interim Director of Membership at PRS for Music also commented saying, “We are incredibly pleased to be supporting the fantastic Handmade Festival yet again and importantly, the exceptional creative talent it brings to the heart of Leicester. We are looking forward to being a part of Leicester’s growing music culture, this year and for many years to come.”