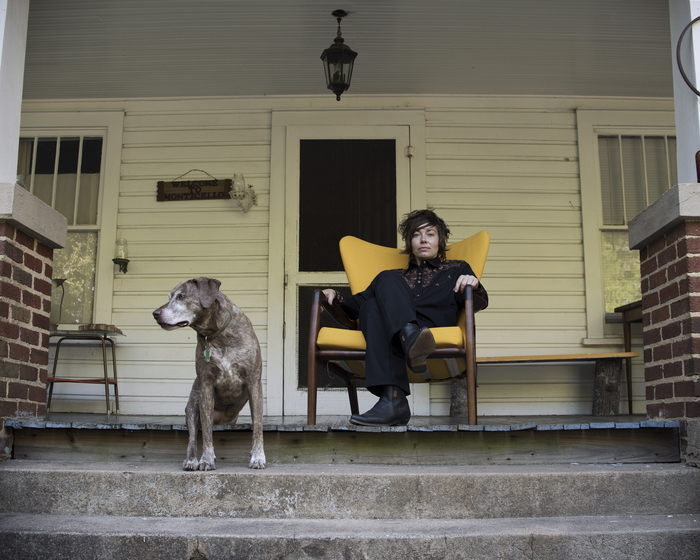 H.C. McEntire
Shares “Quartz in the Valley” and explains the inspiration behind the track
Taken from the forthcoming album LIONHEART, due out on 26 January via Merge

“Despite the turbulence it contains, LIONHEART is too full of warmth and energy to sound like anything but a celebration of what she holds precious.” Uncut Album of the Month, February 2018

For her debut solo album LIONHEART (out 26 January via Merge), H.C. McEntire found a creative catalyst in Kathleen Hanna. What began as an invitation from McEntire to have Hanna’s band The Julie Ruin perform at Girls Rock North Carolina’s 10th anniversary soon turned into a friendship and, ultimately,

an artistic mentorship. “Quartz in the Valley” was the first song the two worked on together, and it’s premiering today on The Grey Estates, who wrote; “McEntire’s vocals radiate with unmistakable strength; a constant guiding force that tempers through a country-music tale of mascara-stained pillowcases and a waiting creek that holds all the answers.”

Back then—fall/winter of 2016—“Quartz in the Valley” was just a voice memo on my phone arbitrarily titled “#47” because that’s where it fell in order. It was barely anything, with nonsensical mumblings of melody and out-of-tune guitar, but Kathleen saw the bones. She said, “Ok, here we go. Work on this. Listen to Wanda Jackson. Get inspired.”So that’s where I started. And she was right. Since then, I feel like that song has always anchored LIONHEART—chronologically, but also symbolically and spiritually. When Kathleen and I began collaborating, I was personally in a dark place, a lost place, and this song was how I started digging out. I don’t want to give too much away, to define the narrative exclusively; but I will say it began in a very raw, scrupulous way: with a shovel, and a barrow, and an inkling to excavate.

LIONHEART is a collection of songs inspired by the American South and a desire to reclaim “country” music from the hetero-normative, homogenous schtick of tailgates and six-packs and men chasing women. Stereogum describes McEntire’s voice as “weary, wise, and bright as morning sunshine all at once,” and that sunshine glows throughout the triumphant LIONHEART.

As well as collaborating with Kathleen Hanna, for the album, McEntire invited many of her favourite musicians to participate, including Angel Olsen, Amy Ray, Tift Merritt, William Tyler, Mary Lattimore, and Phil Cook, while remaining bravely devoted to her most authentic self throughout the process. LIONHEART was recorded during the first few months of 2017 with additional recording and mixing taking place on the run as McEntire toured the world as a member of Angel Olsen’s band.

In case you missed it, here’s the lyric video for “A Lamb, A Dove”.

LIONHEART can be ordered via the Merge store on CD, LP, and limited-edition white Peak Vinyl. In addition, they are offering the album bundled with a special screenprinted handkerchief created by McEntire, who will donate all profits from its sales to Southerners On New Ground. The album can also be pre-ordered from participating record stores, or through your preferred digital music service.
H.C. McEntire’s will be playing a run of US dates with Justin Townes Earle, and will then play a pair of hometown record-release shows at The Pinhook in Durham.