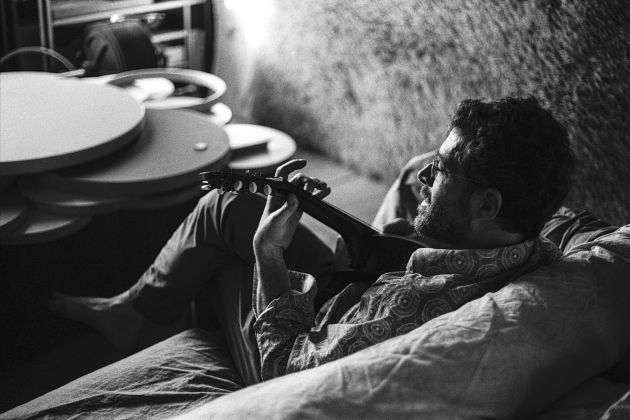 Slowly Paradise is Eric Chenaux’s new solo record – a lovely collection of songs guided by soothing, buttery singing and bent, fried fretwork. We’re pleased to share the wonderful album closer “Wild Moon” by way of a video directed by Eric Cazdyn. Live dates in support of the album’s release on Constellation (9th March) have also been announced – see below, and read on for more information about Eric Chenaux.

Eric Chenaux was a fixture of DIY and experimental music in Toronto throughout the 1990s and 2000s, progressing from local postpunk legends Phleg Camp and Lifelikeweeds towards a highly distinctive technical and gestural mastery of amplified acoustic guitar. An intrepid explorer of free/improvised music, folkways, bent jazz, and sculptural sound, Chenaux began releasing solo and ensemble work in the 2000s, amidst incessant live performances as a central figure in Toronto’s fertile avant/improv scene, and as co-founder of the experimental music label Rat-drifting. Constellation has been home to Eric’s “solo” records since 2006 – a brilliant discography of adventurous, sumptuous, mostly languorous deconstructed folk, jazz and pop-influenced balladry rooted in the juxtaposition of Chenaux’s fried guitar playing and his gorgeously clear and lyrical singing voice.

Eric Chenaux makes conceptual music that’s not meant to sound conceptual. He operates among various ‘traditions’ but perhaps most broadly, Chenaux’s records grapple with the relationship between improvisation and structure in very particular, unique, idiosyncratic ways – and quite without irony or cynicism, through love. Because fundamentally, Chenaux writes love songs, which he sings in a voice honeyed and clear, while his guitar gently bends, frazzles, chortles, diverges and decomposes. This juxtaposition of his mellow, dexterous crooning and his highly experimental (and equally dexterous) guitar explorations, explodes even unconventional notions of singing and accompaniment, of tonal and timbral interplay between guitar and voice.

As a solo artist, Chenaux’s improvisation methods are in certain literal ways solipsistic: as a singer-songwriter, he plays his guitar around and against his voice, challenging easy notions of harmony/harmoniousness, improvising ‘with himself’ in pursuit of surprising himself (and his listeners) as he unfurls ribbons of voice and instrument often to the point of seeming independence. All the better to capture – and be captured by – unforeseen, intimate moments of interdependence: a definition of freedom, as a profoundly intentional state of openness, presence and play.

Even within avant-garde currents of folk and jazz balladry, Eric Chenaux feels like an outlier. Yet his music remains wonderfully warm, generous and fundamentally accessible in spite of its irrefutable iconoclasm. While the constitutive elements of Chenaux’s solo work in recent years might suggest some underlying devotion to asceticism, the opposite is much more true: his musical reveries resist, critique and counteract austerity (in all its forms) in a joyful abandonment to the improvised space where playfulness and light-heartedness are taken seriously, and where love is invoked and expressed, without reductive or facile sentimentalism, in a full, nuanced, clear-eyed suspension/rejection of the cynical life.