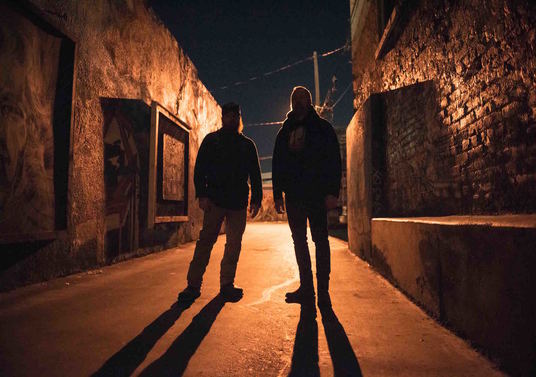 EAGLE TWIN ANNOUNCE THEIR THIRD ALBUM, THE THUNDERING HEARD (SONGS OF HOOF AND HORN);
INCOMING VIA SOUTHERN LORD ON 30TH OF MARCH

Eagle Twin’s commanding sound delivers like a tectonic force, where doom and blues collide. Gentry Densley’s dominating low-end vocal tone is like an instrument in itself, rumbling alongside towering riffs, and Tyler Smith’s powerful rhythmic propulsion. It is a compelling combination, particularly when you add melodious bluesy romp to the equation.

Equally prevailing are the stories that shape Eagle Twin’s musical output, drawing upon folklore, and also strongly informed by recent happenings in the world. Observing our relationship to nature, and the band’s own surroundings in the dead salt seas of Utah are themes that feature frequently across their musical canon. The Thundering Heard continues where the previous album, The Feather Tipped The Serpent’s Scale ended. In the band’s own words…

“As the great snake grew giant fractal antlers of snakes and turned in upon itself creating a new world, the mountains rise, and the antlers stab through like trees across the landscape. The record begins with the hoofed and horned animals of our world running from mountains and forests on fire. Eerily harkening to the recent events in California and the massive devastation by fire across the land.”