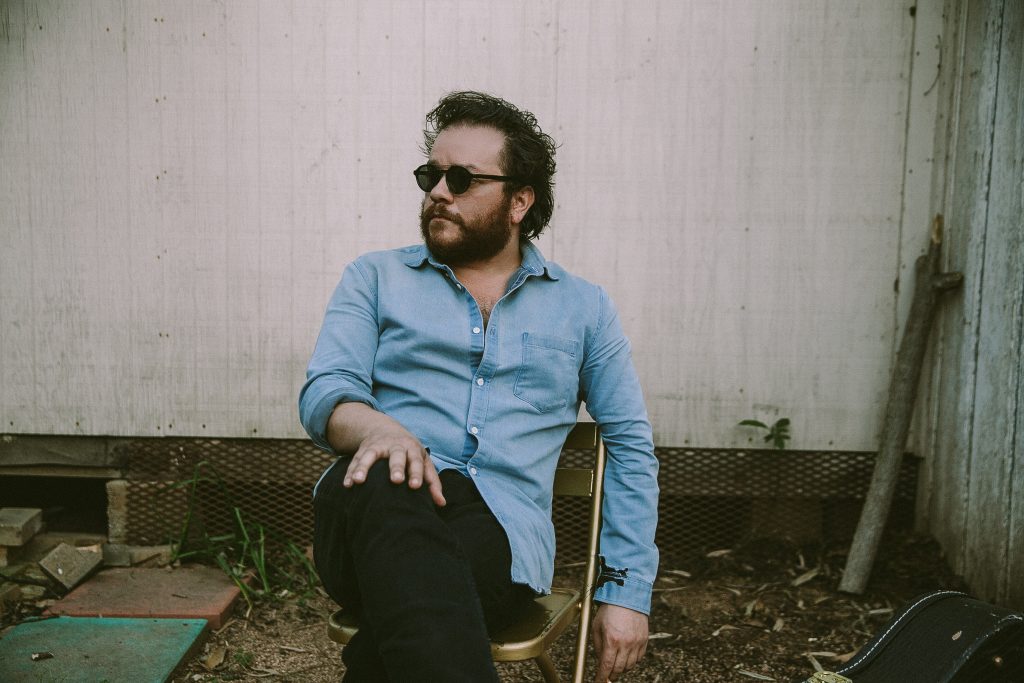 “Beautiful”  – Independent
“Politics seldom sound this heartfelt and honest” **** – Q
“If Springsteen made a record about living in Trump’s America, you’d hope it might sound something like ‘We’re Not Going Anywhere’” – Uncut
“He brings new ways and means to make sense of the chaos around us” – Louder Than War
“A touching tribute to one of the most tragic events of the 21st century” – The Line Of Best Fit
“Its tender lyricism leaves a lingering impression long after those final notes have faded” – Clash
“An acute observer of the fractured state of the nation” – FRUK

David Ramirez has announced details of his new album We’re Not Going Anywhere, set for UK commercial release via Thirty Tigers on January 12, 2018. Produced by Sam Kassirer, the album finds Ramirez painting a vividly imagined picture of contemporary America through the songwriter’s own perspective of having dual American and Mexican heritage. It follows Ramirez’s 2015 album ‘Fables’, described by Q as ‘caked with the grit and dust of an entire lifetime’ and will be support with a 9-date UK tour throughout January, including a stop at London’s St Pancras Old Church on January 12, 2018.

Musically, We’re Not Going Anywhere marks a departure for Ramirez who builds on the rootsy sound of his early albums to create something new and anchored in the present. It’s a record informed and driven by Ramirez’s own background which identifies both promise and protest at a time of socio-political agitation, “so many cultures in this country are being viewed as un-American and it breaks my heart. My family has raised children here and are proud to be a part of this country. Most of what I’ve seen as of late is misplaced fear. I wanted to write about that fear and how, instead of benefiting us, it sends us spiralling out of control.”

This politically engaged concern runs throughout the album and is reflected in tracks such as ‘Stone Age,’ which was written whilst watching from England the horrible prejudiced violence that the United States was going through on Independence Day 2016. “It was heartbreaking to see my country revert back to a state of mind I thought we had been working hard to evolve from,” says Ramirez. Whereas album opener ‘Twins’ questions what it means to be an American in 2017, harking back to Ramirez’s memories of being an 18-year old at the time of 9/11 which he recalls was the first time he felt unsafe and how, as a result of last year’s political election, that same feeling of fear is coming back around.

Working alongside Ramirez’s political concerns with the US, there are songs of break-ups, loneliness, and emotional distancing that help to establish a British tilt on the album too with Ramirez asserting the emotional and mental contests that creep into human psyche with long-distance relationships. Through the lenses of ‘Telephone Lovers’ and ‘People Call Who They Wanna Talk To,’ David diagnoses the struggle of a Trans-Atlantic relationship with a London-based lover, marrying a playful hook with somber realisation of romantic futility on the latter: “I see the Atlantic / But you see a different moon / Don’t call me dramatic / People call who they wanna talk to.” Furthering this solemn mood there lies the sober and self-castigating theme of the album’s first single, “Watching from a Distance,” a track that thrums with iridescent synths and a tight backbeat that sounds like lines on the highway measuring the widening rift between lovers.

“This is the first album I’ve had properly produced,” says Ramirez, who either produced or co-produced all of his previous efforts. For We’re Not Going Anywhere, he hired Sam Kassirer, who has previously helmed albums by Josh Ritter, Lake Street Dive & Bhi Bhiman. In January 2017 Ramirez and his band decamped to the Great North Sound Society, an eighteenth-century farmhouse in rural Maine that serves as Kassirer’s studio. “It’s very secluded, which was part of the appeal. We were able to get out of our touring headspace and stay completely involved with the record and what we were doing. That allowed the band to concentrate on the music, to pursue ideas without distractions and misgivings.”

We’re Not Going Anywhere turns that distance into a big-picture perspective — compassionately political but not necessarily partisan. “We’d take breaks during the day and watch the news and see all the rallies and marches and the disruption and the out-of-control feeling that was everywhere then—and, frankly, still is now. We were looking around and no one was around us. The closest house was a mile away, so it was just us. We were grateful just to retreat from that social tornado for a while and create something that we hoped would be very beautiful.”

Looming over every song is the ghost of Ramirez’s great-grandmother, who inspired “Eliza Jane,” a deeply poignant tune near the album’s conclusion. In plainspoken lyrics, Ramirez describes how she and her brothers left Oklahoma during the Great Depression, heading northwest to Oregon. “My mom was telling me this story and the song was writing itself. I wish I had known her because I’m curious what drove her: Why did you do this? Was it just for fun? Was it a passion so deep-rooted that you couldn’t not do it?” His great-grandmother’s vehement determination is ultimately reflected in Ramirez’s approach to fear, a message found in the album’s cover art which depicts a mother and daughter – both of which have fought off breast cancer – celebrating their lives on top of a car, refusing to be outlined by death or sickness.