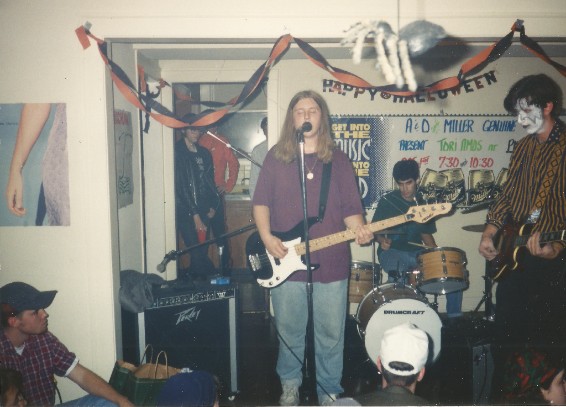 Wendyfix’s “We Have The Cracks” and Remy’s self-titled EP, Newly Remixed and Remastered, Out now  via Carpark

Carpark Records is releasing two special new albums today from label founder Todd Hyman’s early 90’s college bands, Wendyfix and Remy. Originally released on cassette and long since out of print, these gems of indie rock are newly remixed by Pat Jones (Toro Y Moi, Washed Out) and remastered by Joe Lambert from the original half-inch tape masters and are being digitally released for the first time on Todd Hyman’s Carpark Records.

In celebration of the releases, the bands have each shared a music video, Remy’s warm tripped out “Coco Pebbles,” directed by JP Mayer and Wendyfix’s “Ridge,” directed by the band’s own Todd Hyman. Speaking about the video, he shared:

“I made this video the last quarter of my senior year of college (1995). I had an idea that I would be a music video director after I graduated. So I was trying to beef up my CV. I went rogue and borrowed a 16mm film camera from the university. There is some performance shots of Wendyfix minus me because I was the camera person. Then there is some footage of some other bands playing a show. Finally there is some super 8 mm film footage I shot at the infield of the Kentucky Derby spring of 1995 (I grew up in Louisville.) That stuff at the end is me leaving the shutter open on the camera and swinging the camera around at some street lights at night.”

WENDYFIX:
Long before Carpark had formed, Hyman was making music from his Chicago dorm room during the golden age of Chicago’s indie rock and punk scene. Yet on the geographical and formal edges of this cultural maelstrom was a group of young college students taking a different approach. Fusing together indie Anglophilia (New Order, Psychedelic Furs, Swervedriver) and the sensitive emo of loud/quiet acts like Slint and Bedhead, Wendyfixwas a blacksheep in the Chicago indie music zeitgeist.

Formed by a trio of college radio DJs from Northwestern University, the band played numerous house parties in Evanston and around Chicago before going on to play the usual haunts like the Lounge Ax, the Metro, and the brand new Empty Bottle. Things seemed to be on the up and up but then the band members, Todd Hyman, Jon Solomon(Comedy Minus One Records), Ted Pauly, and Brian McGrath graduated college and things fell apart. All that was left was two recording sessions at King Size Studios in Chicago, and two one-off recordings for compilations. A seven inch with two songs was released at the time, but until now most of the music has been unavailable.

REMY:
Remy was a mid 90s Chicago indie-rock power trio that emerged from a small organic pre-internet scene based around Northwestern University’s college radio station WNUR. Matt Walters (guitar), Peter Schaefer (bass), and Todd Hyman (drums) started playing music together, channeling the energies of Pavement, Polvo, and Archers of Loaf into something a little softer and less detached that they could call their own. Remy thrived on delivering infectious melodic pop melodies set against a quirky bed of jangly riffs and rhythms.

This self-titled collection encompasses their complete studio recordings with Mike Hagler (Wilco, New Pornographers) at the acclaimed Kingsize Sound Labs in Chicago, IL, during the spring of 1995. This collection was originally released as a cassette only in late 1995 on Matt Walters’ label Spade Kitty.

Wendyfix
We Have The Cracks
January 12, 2018
Carpark Records

A MESSAGE FROM TODD HYMAN:

In the early to mid 90s I was attending university in Chicago and consuming music voraciously.  My friends and I all djed at our college’s (Northwestern) radio station WNUR.  My freshman year I was doing a jazz, rock and freeform show.  I remember one day a week worked out where I was doing shows from 5am to 10am, and then again from 1-4pm and then 7-10pm!  Not sure how I did it.

By sophomore year I wanted to contribute more.  My two flatmates and I decided to form a band.  It was named wendyfix after a local high school tennis star.  I played drums….with the children’s drum kit I got when I was around 10 years old.   I had started taking drum lessons when I was 8 after banging on the couch one too many times listening to my brother’s lp copy of Rush “Permanent Waves”.

Wendyfix existed for about 3 years until graduation.  My junior year I also started playing drums in a band called Remy with two other WNUR music obsessives.  And by my senior year I was also drumming in a band with my girlfriend at the time called Not Without My Daughter.  Busy times!

After graduation I wandered around trying to figure out what to do.  I lived in New York and Chicago each for a year.  I worked in record shops (Reckless in Chicago, Kim’s West in New York). I PA’ed on TV commercials. I obtained a post graduate degree studying popular music with Simon Frith in Glasgow in the late 90s.

The idea of starting a record label periodically would enter my mind.  But I kept telling myself that my tastes were always changing too fast to do that.  I thought record labels had to have a “sound”.  And I didn’t want my brain to feel stuck in a certain genre.

That changed when I moved back to New York from Glasgow in late 1998 though.  I was working at the now defunct shop Etherea in the East Village.  A bunch of us who worked there created an experimental electronic night at Brownies called Invisible Cities.  We had Wednesday nights from 11-4am.

At first we thought we’d just be djing, but there were so many folks looking to play that couldn’t find a spot, we eventually started having a “live” laptop set every week.  This was at a time when performing with a laptop computer was becoming possible for the first time.

I met so many interesting musicians through this experience that I decided that it was finally a good time to start a record label.  And Carpark was born!

Experimental electronic music seems a far cry from the introspective indie rock of Wendyfix and Remy but it all made sense to me.  Anyway one of the things I learned running Carpark was that I didn’t have to stick with a certain sound.  So after doing the electronic thing with Carpark for a few years I started branching out and now just put out whatever I think sounds good/interesting etc.

A year or two ago I thought it would be a good idea to dust off the half inch tapes and make this music available again.  Hope you enjoy!