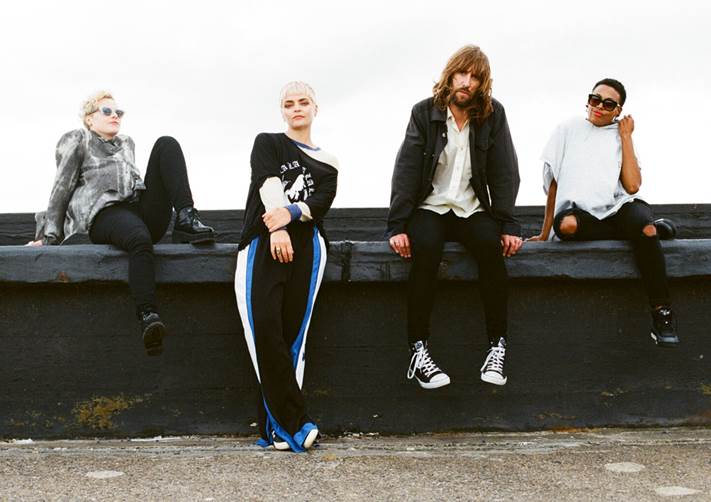 ”An atmospheric record rich in allusion and dark artistry.’ Clash

Marking the return of a band who hinted at enormous potential a few years back before disappearing without trace, Black Gold Buffalo’s long awaited debut full-length is set for release on 6th April, via their own Buff Rekkids label. The self-titled collection of brooding, dark pop gems is largely about wanting to escape the city, to get up and go somewhere and nowhere. ‘It’s more a commentary than a statement, a narration of our personal experiences and frustration with the corporate climate,’ offers frontwoman Keziah Stillwell, whose own disillusionment led to to a bold move away from the capital.

Black Gold Buffalo started life in East London back in 2014, with founders Keziah and underground dance music figure and Batty Bass head honcho Hannah Holland (bass) at the helm. The dark eyed and bold hearted four-piece emerged with spates of early promise, releasing a series of slow-burning delights in quick succession, before dispersing in different directions. It was after a cosmic meeting with Adrian Sherwood at a festival in Croatia that Keziah and Hannah were convinced in to move to the South East coast, a newfound haven for musicians and artists. Time out spent writing and honing their production skills in Ramsgate enhanced their innate creativity and with the addition of two of the best musicians and friends they knew, something clicked. With Marc Hayward on guitar, Joy Joseph on percussion/drums, and Nicholas De Carlos signed up to produce their debut, the newly reformed buffalo took a revitalised stance. Joy’s particular musical background was formed playing steel pan in a family Calypso band. A world class percussionist, she regularly plays with the likes of Hot Chip and Jessie Ware.

‘Black Gold Buffalo’ is a stunning debut bearing the fruits of it’s band member’s different musical backgrounds and mutual respect for each others talents. Sultry pop and deviant rock n roll collide in harmony, their coldwave stabs and analogue licks providing a fitting backdrop for Keziah’s hypnotic vocals. Album opener and first single ‘Pearls Deep’ was written, along with a few others on the record, in a tower block in Homerton, Hackney. ‘Its a song about feeling trapped and yearning for something else’ says Keziah. ‘I love my city but I want leave it. Where would I go?’  ‘Start a Fire’ was penned when she and Hannah were living in a shoebox flat with landlords from hell. ‘It was a very stressful time for many reasons, questioning corporate fuckery and how on earth we can change it.’ Whilst the album’s lighter moments (‘Magnets,’ ‘Anntropix, ‘Weightless,) offer sporadic, hopeful and dreamy respite, the politically charged messages that permeate throughout are hard to shake. Fittingly, the band’s ethos is totally DIY. ‘We run our own label, we make our own art, and we call on friends to make vides and remixes,’ they say. And with a debut of this calibre, why should they need anybody else?

“Your mind will fester and your head will roll” sings Keziah on new single ‘Lay It Down,’ a song she wrote on overcoming anxiety.