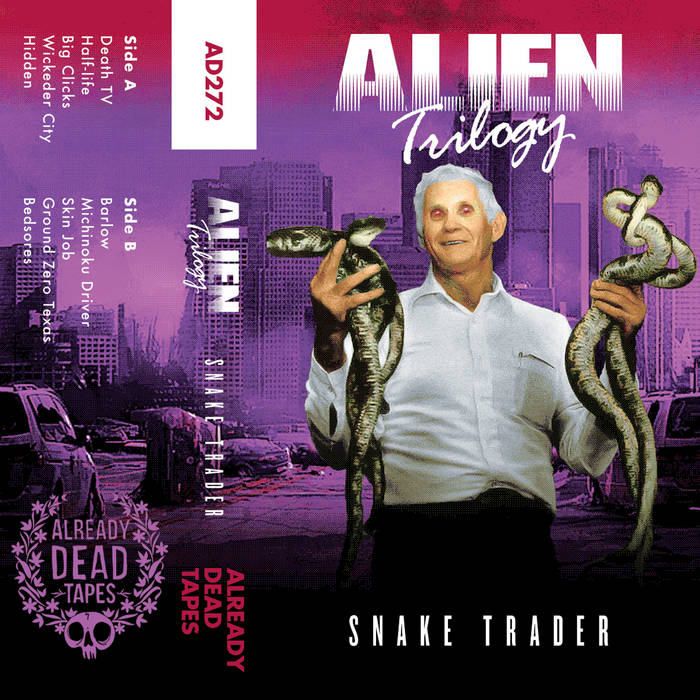 Following another successful year for the incredible label Already Dead Tapes, 2018 looks to be even better for the passionate home of some unique records. The label kicked off the new year with their 272nd release since their creation. Their first release of this new year comes from  Brooklyn trio (drums, guitar and synth) sci-fi noise punk outfit Alien Trilogy. The name alone should intrigue you!

“On their latest release, ‘Snake Trader,’ Brooklyn’s Alien Trilogy immediately kick in the door with an all-out aural assault that rarely lets up until the end. It starts with a man yelling, which creates a very unsettling tone. The drums come in with hard-hitting momentum, along with a thick, almost video-game-sounding bass. There’s a squiggly guitar part and the first of many voice overs. That’s just the first ten seconds. This is a fun record.

Alien Trilogy do a whole lot with not much. After spending a few weeks with this record, I still don’t understand what the hell is going on and Alien Trilogy haven’t made it easy to find out. There’s so much going on here that I originally thought they were a five-piece. The music is complex enough that it would be tough for any of them to be singing and playing at the same time. The bass lines rock so hard that it’s difficult to imagine them coming out of anything not shaped liked a guitar. There is obviously a keyboardist, guitarist, and drummer here, but it turns out there is ONLY a keyboardist, guitarist, and drummer here. The keyboard hammers out bass lines along with some mostly textural higher-end stuff. The guitar alternates between additional synth-like textures and shredding like an ‘80s postpunk band on Prozac. The drummer holds it all together while somehow managing to sing at the same time.

This record is fascinating and reveals more with each subsequent listen. There are several voiceovers which remind me of the collage elements of those Crass records while the music reminds me of a much more rocking Chrome. The second-longest track on the album has a reading of a beat/noir/sci-fi story over some noise. Normally I’d expect something like that to be jarring enough to stop the momentum but in this case it only adds more of an intensity to an already intense record.”

Already Dead Tapes are a small label with the biggest heart. This brilliant label is effortlessly going from strength to strength, gaining quite a reputation for the amount of incredible records and the talent they are releasing, their aim is to produce and distribute small editions of tape and vinyl.

JIM-E STACK REMIXES THE PERFUME GENIUS TRACK ‘WITHOUT YOU’

BIG|BRAVE ANNOUNCE FIRST ROUND OF TOUR DATES FOR 2018