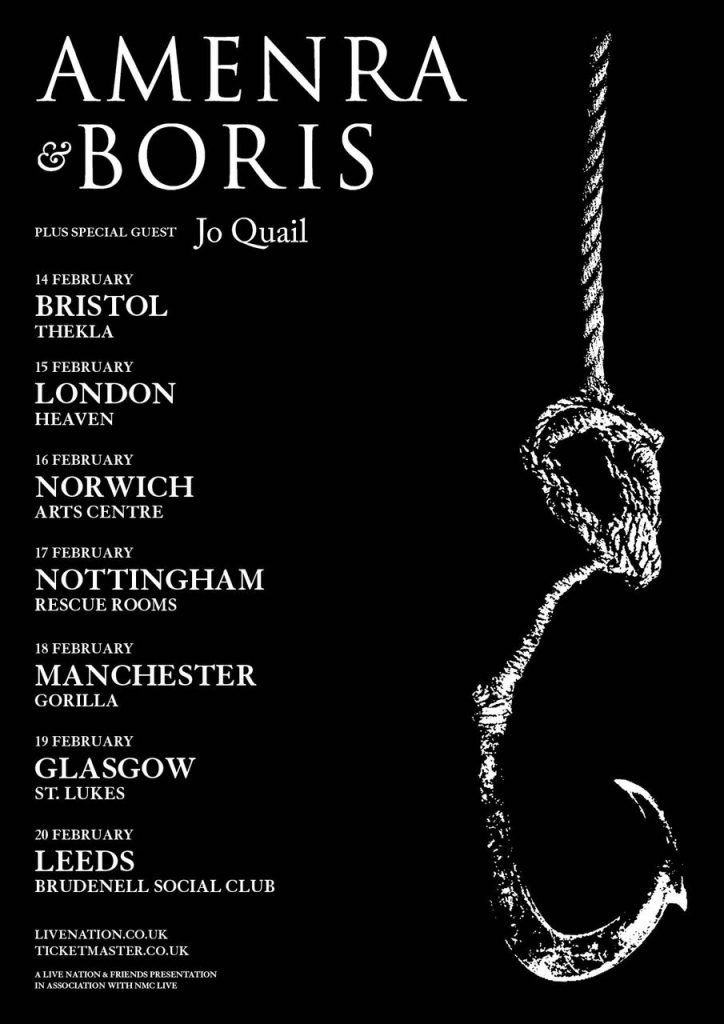 Fresh from opening for Myrkur over the past week, as well as joining her on stage in her Folkesange project, internationally acclaimed composer and virtuoso cellist Jo Quail has been added to the UK leg of the upcoming Amenra and Boris European tour. Jo comments:
‘Supporting Amenra and Boris on the UK leg of their co-headline EU tour – WOW! I cannot wait! It is a true privilege to play these concerts.  I’m a soloist, and I perform my music that sits somewhere between contemporary classical, post-rock, avant garde and experimental. It is an honour to be invited to open the stage for two genre-defying bands who are masters of their craft, who have been and continue to be revolutionary in their individual approach to composition, performance and musical ethos and who reach in to the depths of being both spiritually and sonically.

I recently performed with Danish goddess Myrkur on her Folkesange tour, supporting and also joining her ensemble for 4 songs. It was fascinating to step in to her world and to have an opportunity to work with her and the ensemble in realising both the traditional folk songs and her own compositions too. I felt very lucky to receive such a warm response from her audience.’

On this tour Jo will be playing some pieces from her forthcoming 4th album (released later this year) and adds, ‘I’m looking forward to seeing how these develop during this tour. I find that only when I take a composition on stage do I fully begin to know and understand it; it morphs, develops, and reveals itself with each performance and my audience is as much a part of the writing process as I am. I’ll be recording this album with Chris Fielding at Skyhammer Studios (Electric Wizard, Primordial, Conan) in March, Chris is an outstanding producer and I think we’re going to have a lot of fun making this record!

Since starting to play solo in 2010, Jo has released three albums, three EPs and a live DVD and toured across the world with the likes of Caspian.