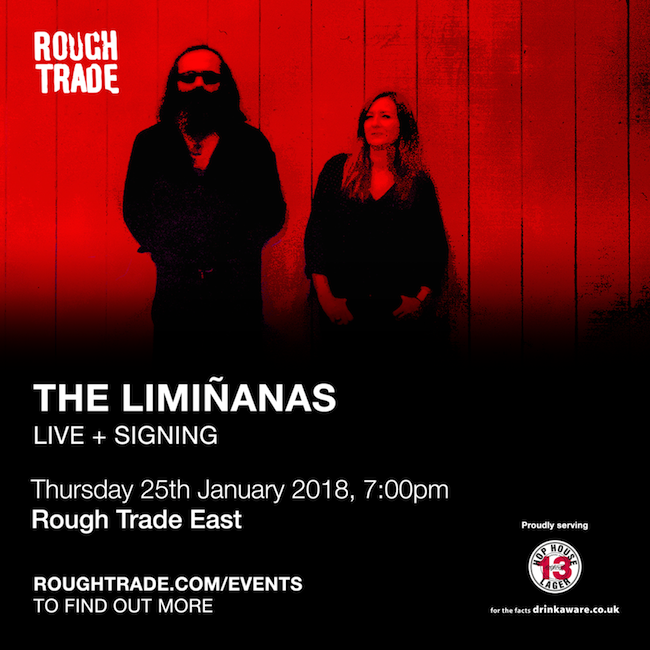 PRE-ORDER ‘SHADOW PEOPLE’ HERE
“Sounds as if they have stepped out of Quentin Tarantino’s dreams…. a 60s-saturated stunner” Uncut
“Garagey, soundtrack-infused psych, a swirl of pounding drums, spoken French, baroque melodies” Mojo
“The Limiñanas stick to what they know — The Velvet Underground, Serge Gainsbourg, JAMC fuzz, ’60s soundtracks — but it always sounds effortless and cool” Brooklyn Vegan
French psych duo The Limiñanas have confirmed they’ll be playing an in-store at London’s Rough Trade East on Thursday 25th January to celebrate the realease of their new album ‘Shadow People‘, out on 19th January on Because Music. Event info HERE.
One of France’s most beloved treasures, The Limiñanas are Marie (drums/vocals) and Lionel (guitar, bass, keyboards and vocals). Hailing from Perpignan, the duo straddles the boundary between psych, shoegaze, and yé-yé. With hazy, reverb-laden hooks, combined at times with noisy distortion, and fronted by effortlessly cool vocals, reminiscent of Serge Gainsbourg and Brigitte Bardot,the band is at once timeless and quintessentially French.
“What was old is new again”… The old adage is so tired that nobody takes its proper measure: all people hear is the word “old”, when the important one is “new”. Making new things out of old things is an act of alchemy. It’s very complicated. You take rusted lead and transform it into sparkling gold… The Velvet Underground, The Stooges, The Standells, Chocolate Watchband, Billy Childish and other garage heroes; Ennio Morricone, John Barry and 1960’s Italian songs; Can, Neu! and all the Teutonic knights of motoric groove; The Cramps, of course, Nick Cave, Gainsbourg and tonic psych rock: Lionel and Marie from the Limiñanas know them all by heart, they worship them. They drink from that well and, after a good kneading and pounding, they make something else out of it. “We don’t do revivalism”, states Lionel from behind his beard. “In fact, some purists are accusing us of selling out, which is a good sign”.
The duo have recently shared the video for ‘Shadow People’, a track taken from their full length. Directed by previous collaborator Aurelien Richter, the video features acclaimed French actress Emmanuelle Seigner, who also provides vocals on the track.
The video was shot in The Limiñanas’ home studio in Cabestany in the South of France, and it also features Foulke de Boixo, the dancing hero from previous video ‘Istanbul is Sleepy‘, and Renaud Picard, who duets with Emmanuelle Seigner in the song.
WATCH ‘SHADOW PEOPLE’ VIDEO feat. EMMANELLE SEIGNER ON YOUTUBE
New album ‘Twinsting the Shadow People’ was recorded and produced at The Brian Jonestown Massacre‘s Anton Newcombe‘s studio in Berlin.
TRACKLISTING:
1. Ouverture
2. Le Premier Jour
3. Istanbul is Sleepy
4. Shadow People
5. Dimanche
6. The Gift
7. Motorizatti Marie
8. Pink Flamingos
9. Trois Bancs
10. De La Part Des Copains
www.theliminanas.com