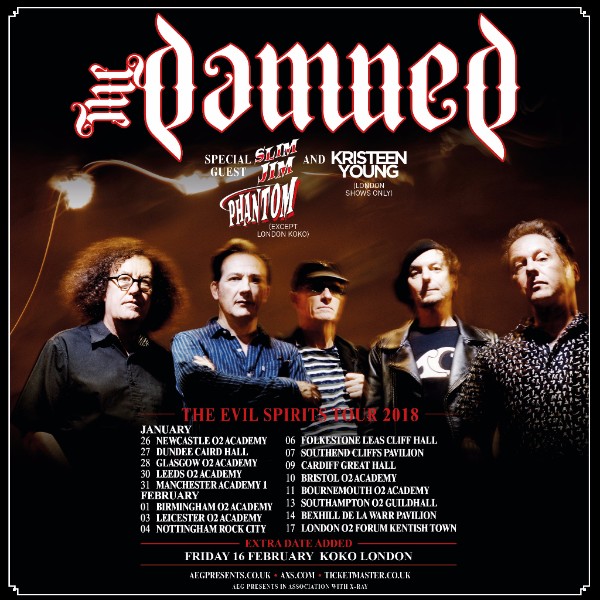 Over forty years since their initial explosion across the fledgling London punk scene, and some ten years since the release of their last studio recordings, British punk legends The Damned are set to return in 2018 with both new material and an extensive UK tour.

Kick-starting 2018 on January 26th with the previously announced ‘Evil Spirits’ tour, due to popular demand the band have announced an extra date in addition to their headline performance at The Forum on the 17th of February and will now also play Koko on the 16th, taking over North London for a very special weekend of prime-Damned entertainment.  Main support on the tour comes from fabled Stray Cats drummer Slim Jim Phantom, whilst at Koko American ‘operatic-punk’ performer Kristeen Young will open the show.

Also joining the tour, following the departure of bassist Stu West, is former bass player Paul Gray. Paul was part of the band for two incredible albums during the eighties (‘The Black Album’, ‘Strawberries’) and has also played with undisputed legends such as Eddie And The Hot Rods, Johnny Thunders, UFO and Rob Tyner from the MC5 throughout his career. News of his reunion with the band was greeted with much excitement from The Damned’s dedicated fan base.

“I wasn’t the best bassist in the band… by a long way,” says Captain Sensible. “That was Paul, The Damned, Eddie & The Hot Rods, UFO; listen to that playing, the bloke is a master of his instrument and it’s great to have him back for the tour.”

Having last released new material in 2008 with their ‘So, Who’s Paranoid?’ album, 2018 will see the unveiling of a hugely-anticipated new album. Recorded in New York by famed producer Tony Visconti, whose list of past working-relationships reads like a who’s who of popular music (David Bowie, T Rex, Morrissey, U2, The Stranglers, Iggy Pop and Thin Lizzy to name but a few!), the band have signed a new deal with Search & Destroy/Spinefarm Records and are set to stun the music world once again with their dizzying blend of high-energy punk rock, creative psychedelic pop and classic song-writing.

“Our new Tony Visconti produced album, as with all previous Damned records, very much has its own sound,” continues Captain. “We’re looking forward to having an element of that mixed in with the old faves.”