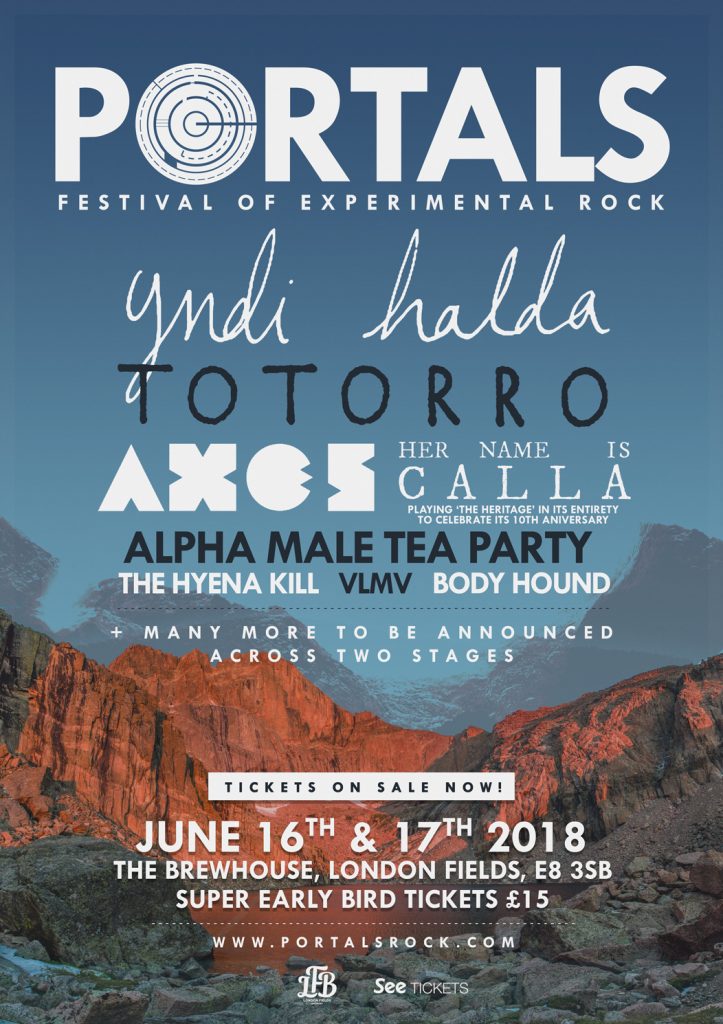 Portals announce London’s first two day, two stage experimental rock festival at the London Fields Brewhouse 16th – 17th June 2018
Portals was born as an all-day event with an ambition to curate the finest experimental, math and post rock gigs in London.
Two and a half years on, Portals has grown into a fully-fledged festival, taking place at the London Fields Brewhouse. The space is an intimate setting which features 2 indoor stages and a garden which will host food vendors to give the space the real festival vibe, like a mini sanctuary for experimental music within touching distance of the frantic hubbub of Central London.
The first announcement includes sets from yndi halda, Talons, Totorro, Axes, Alpha Male Tea Party, Her Name Is Calla, VLMV, Body Hound and The Hyena Kill with many more bands still be revealed.
Legendary post-rock band yndi halda will close the festival on Sunday night. The band rose to prominence in 2006 with their seminal album Enjoy Eternal Bliss, released on Big Scary Monsters and quickly rose to the forefront of the post-rock scene. The band then went on indefinite hiatus, making a surprise comeback in 2016 with new Under Summer. The new record featured a progression from their early sound and cemented their position as one of the most important bands around.
Praise for yndi halda:
“A much needed shot in the arm for the post-rock scene and sound” (Drowned in Sound).
“Challenging themselves and the very conventions of post rock” (Pitchfork)
Joining them will be French math-rock heroes Totorro, sensational UK party/math quartet Axes, Liverpool’s noise/math trio Alpha Male Tea Party, the stunning folk/post-rock of Her Name Is Calla, performing their first album in its entirety, VLMV, Body Hound and The Hyena Kill.
There is still plenty more bands still to be announced, including 2 more headliners.
Tickets available now: http://www.seetickets.com/event/portals-festival/london-fields-brewhouse/1184817
https://www.facebook.com/portalslondon/