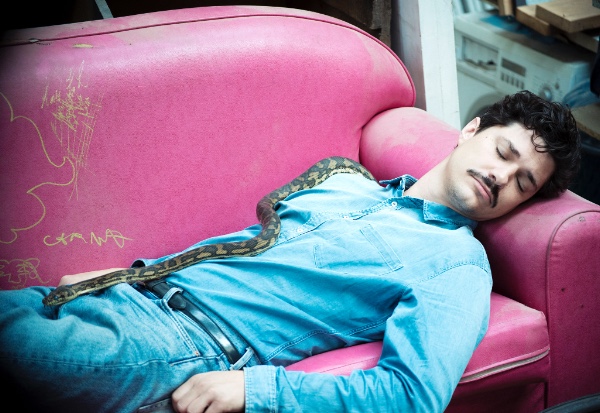 “Drenched in the cosmic swirl of warm synths and dreamy atmospherics” – 4/5, Q
“Their own arty, experimental tendencies ensure 1982 is far more than a trip back in time” –  4/5, Classic Pop
“Packed with so many lasting melodies and shifts in tone and dynamics” – 4/5, DIY
“There is plenty left in the Liima tank, and nothing more appealing than the freeform, experimental edge to tracks like ‘David Copperfield’ and ‘Kirby’s Dream Land’, but never at the expense of groove or melody.” – 7/10 Loud and Quiet
“The quartet jam with Joy Division’s atmosphere to create a glitchy, skittering reflection” – MOJO

Liima have shared a new video for “Life is Dangerous” taken from their latest album ‘1982’, which was released on City Slang earlier this month. The video rounds off a busy 2017, which included live dates with Grizzly Bear, and anticipates their headline tour at the start of next year – dates below.

Filmed in Paris, the video for “Life is Dangerous” was originally planned to centre around bungee jumping, but it was impossible due to logistics. After an intense full minute of brainstorming in the tour van, Liima decided that snakes are equally scary. Life is Dangerous!

Speaking about the video, director Hugo Jouxtel said: “Danger is a fantasy, an idea, not much different than a dream. Danger is an accident waiting to happen and often triggered by our most profound fears. So this video takes us to a place connected with the subconscious. Is it real? Is it only a dream? And in the end, what’s the difference?”

Liima front man Casper Clausen explained the song saying: “Life Is Dangerous is the first song we wrote for ‘1982’. We spent a week long residency in a 5 star hotel near Oxford street in London, and every day we would walk from our rooms through the lobby to the rehearsal space in the basement of the hotel wearing white robes and slippers, surrounded by luxury from floor to ceiling. A parallel world. We had to pinch ourselves, in a sort of David Byrne “Once in a Lifetime” kind of way, and the refrain of the song just popped out in a strangely natural way; Life is Dangerous.”

Like its predecessor, ‘1982’ was written during four residencies, beginning in January, 2016 – before Liima’s debut ‘ii’ was even released – at The London Edition, where Casper Clausen, Rasmus Stolberg, Mads Brauer and Tatu Rönkkö worked in a club in the hotel’s basement, sometimes watched by small crowds, much as PJ Harvey was during the making of The Hope Six Demolition Project at London’s Somerset House.