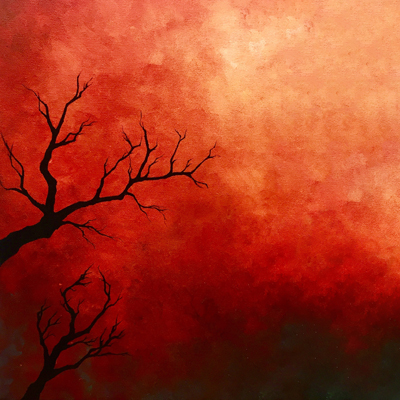 Bristols Hoggs Bison play math-rock with a difference, while the music is still played with a technical brilliance, there is a warmth to the bands sound that definitely makes the stand out from the crowd and that warmth totally blankets their fantastic debut album Aeons.

The album opens with the comforting (and tremendously named) Intro-A-Go-Go and as an introduction to the sound of Hoggs Bison, it doesn’t get much better than this impressive start. The song glows with a confident shine as it flows again and you feel yourself both captivated and swept away by the music.

That fine start continues with Olde Bogey, a more downbeat track but that feeling is still swamped with warmth and feels more introspective than anything and adds another layer to the album, something that the album has in spades and it is these layers that make it such a compelling listen.

Gold Top Jersey is more upbeat but mixed it up with a jagged spikiness that is an interesting development in the sonic landscape and in keeping with the twists and turns that this album takes, the next track Bobs Secret Cache is a song that shows many different emotions during its duration, none more so than a sense of great hope with its towering ambitions as it reaches its conclusion.

The Wrong Right and Milk Milk Lemonade showcase a more angular sound but still retain that warmth as both morph into anthemic pieces of music that are as catchy as they are jagged, with rhythms that will defiantly get stuck in your head.

The album commences with the jaunty Age Of Rheum and the majestic Capaldice, a pair of songs that end the album on a delightful high and that sense of warmth washes all over you again for the final time.

Aeons is an album that Hoggs Bison should rightly be proud of as it is both a confident and inspiring album that envelopes you with its sense of warmth, has a tremendous amount of heart and soul and conjures up a vast array of emotions whilst you listen to it.