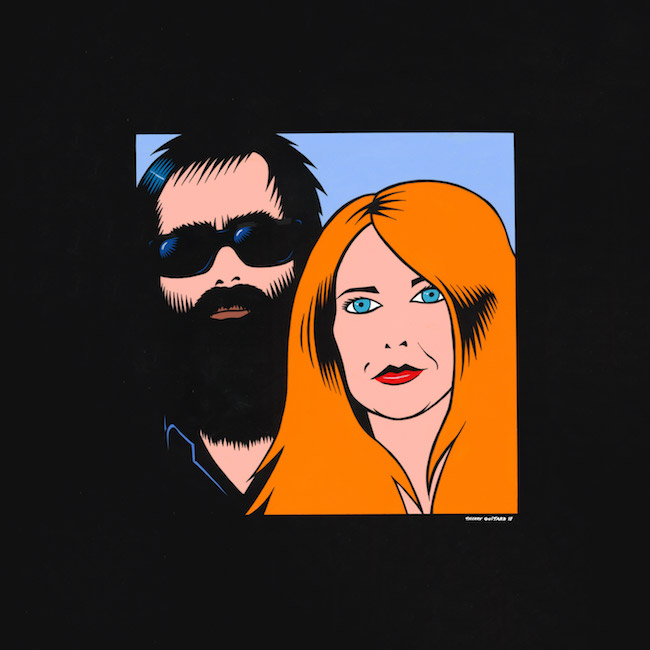 ‘ISTANBUL IS SLEEPY’ EP OUT 17th NOVEMBER ON BECAUSE MUSIC
Sounds as if they have stepped out of Quentin Tarantino’s dreams…. a 60s-saturated stunner” Uncut
“Garagey, soundtrack-infused psych, a swirl of pounding drums, spoken French, baroque melodies” Mojo
“The Limiñanas stick to what they know — The Velvet Underground, Serge Gainsbourg, JAMC fuzz, ’60s soundtracks — but it always sounds effortless and cool” Brooklyn Vegan
French psych duo The Limiñanas have released a new track taken from their ‘Istanbul Is Sleepy’ EP out 17th November.
Featuring acclaimed French accress Emmanuelle Seigner, ‘Shadow People’ was recorded in The Limiñanas’ home studio in the South of France, and finished at The Brian Jonestown Massacre’s Anton Newcombe‘s studio in Berlin.
Lionel from the band explains: “The shadow people are an American myth, they are described as furtive apparitions, comparable to ghosts observable from the corner of the eye. These “spirits” accompany throughout your all life, a sort of paranormal glue stuck to you… Emmanuelle came to visit us in the South of France, and we asked her to sing “Shadow People” with Renaud Picard, the singer from Hair and the Iotas. We recorded it in just a few minutes over an afternoon…”. Emmanuelle Seigner added: “A friend introduced me to The Limiñanas, I was in love with their Music. Three days before our first meeting, Lionel Limiñana called me and offered me to sing on one song off their new album. He sent me ‘Shadow People’. Then we recorded directly at their home, it was fast, easy and pretty natural”.
LISTEN TO ‘SHADOW PEOPLE’ feat. EMMANELLE SEIGNER ON YOUTUBE AND SPOTIFY

The band, who are set to release a new album early next year, have recently shared EP track ‘Istanbul Is Sleepy’, which features Anton Newcombe and was also produced at his Berlin studio. Watch ‘Istanbul is Sleepy’ video HERE.
One of France’s most beloved treasures, The Limiñanas are Marie (drums/vocals) and Lionel (guitar, bass, keyboards and vocals). Hailing from Perpignan, the duo straddles the boundary between psych, shoegaze, and yé-yé. With hazy, reverb-laden hooks, combined at times with noisy distortion, and fronted by effortlessly cool vocals, reminiscent of Serge Gainsbourg and Brigitte Bardot, the band is at once timeless and quintessentially French.