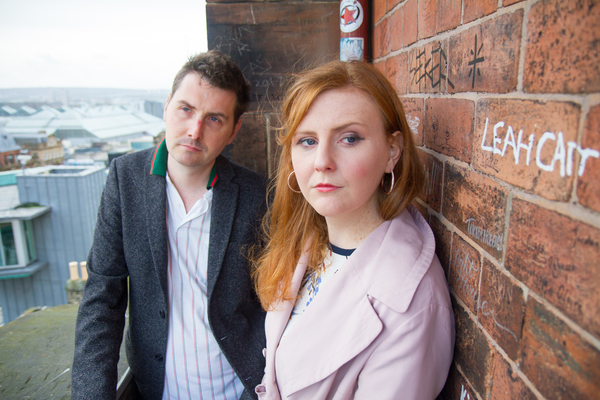 Share video for “I Only Smoke When I Drink”

Taken from forthcoming album You Might Be Smiling Now…
Due out next Friday, 1 December via Fika Recordings

In anticipation for the release of their long awaited new album You Might Be Smiling Now… (due out on Fika Recordings on 1 December), cult Scottish band The Just Joans share the video for single “I Only Smoke When I Drink”. The perfect way to get in the mood for a Friday night on the town, the video was premiered by For The Rabbits, who wrote, “It traces a night out from its hopeful beginnings, through to failed romanticism and ultimately, predictably booze fuelled disaster.” They also described the album as; “an exploration of angst, heartbreak and detachment, delivered with a flash of humour from the bottle of a whisky bottle (or should that be a Buckfast bottle).”

Songwriter and guitarist David Pope says this of the song: ““I only smoke when I drink” is an ode to the tragicomedy that is the weekend. TFI Friday quickly evaporates to be replaced by FML Sunday, and the perpetual search for someone to stay in with inevitably ends in heartache and hangovers. Older but not much wiser, let’s raise a glass, light a cigarette and tell ourselves…maybe next weekend.”

Quote from the video director, Jason Sweeney (Director) – “The video was shot in and around Glasgow’s notorious Sauchiehall St and anyone that’s been on a night out anywhere should identify with the ‘angst-hope-angst’ trajectory as mirrored in the song and video, and possibly also in sourcing then dealing with the aftermath of nicotine.”

The band will be playing a few live dates, including an album launch in Glasgow on 2 December at McNeil’s Bar for a special festive show, as well as a headline date at The Lexington in London in February 2018.
Formed in Glasgow in 2005, The Just Joans have evolved from two-piece to a shambling sextet that embrace rivalry and relationship in the vocals of siblings, David and Katie Pope. Once described by Is This Music as, “the missing link between The Magnetic Fields and The Proclaimers”, the band have used self-awareness and self-deprecation to continuously explore themes of angst, heartbreak and detachment in their songs.
From their 2006 debut album Last Tango in Motherwell through a series of successful EPs to 2012’s compilation, Buckfast Bottles In The Rain, the acerbic wit in David Pope’s observational lyrics have helped make the band icons of the indie-pop scene and a favourite fixture at the annual Indietracks festival.
This year’s long-awaited follow-up offers more of the same cynicism, but from an older if not necessarily wiser perspective as evidenced on lead single No Longer Young Enough and You Make Me Physically Sick (Let’s Start Having Children), a jaundiced slice of toybox pop that crosses The Human League and Harold Steptoe.
Complementing this shift in tone comes a new electronic sound on tracks A Matter of Time and Someone Else That You Like More Than Me while Oh Caledonia sails along at a blistering pace like no Just Joans lament before it.
Despite the band’s obvious maturity, You Might Be Smiling Now… still manages to maintain all the emotional charm and whimsical melodies that led The List to view The Just Joans’ songs as ‘a lovable blend of sleepy acoustic guitars, Brian Wilson-esque harmonies and West Coast sarcasm.’
Discussing his band’s new album, singer-songwriter David Pope said: “You Might Be Smiling Now… could be considered a loose concept album. The songs detail the confusion in my teenage years, the horror of my twenties and the terror of my encroaching middle age. It’s somewhat self-indulgent, but I hope that these wee stories about small town boredom, drunken romance and misty-eyed nostalgia resonate with the other overgrown teenagers out there in their mid-thirties.”
The Just Joans are David Pope (vocals and guitar), Katie Pope (vocals), Chris Elkin (lead guitar), Fraser Ford (bass guitar), Doog Cameron (keyboards) and Jason Sweeney (drums).
“a pleasingly familiar blend of vibrant pop and acerbic wit from the Glasgow-based six-piece.” – The List (on “Biblically Speaking”)
“Finding poetry in the often humdrum problems of others, the band’s attempts to document daily life resulted in some rather fine songwriting.” – Clash (on No Longer Young Enough”)
“A winsome and gentle hook filled slice of delicate indie pop with some lovely ‘woos’ in the background and the gentle Glaswegian accent of singer Katie Pope. It’s a gem.” – Overblown (on “No Longer Young Enough”)

The Just Joans
You Might Be Smiling Now…
Tracklisting:
1. O Caledonia
2. Steal The Keys (1996 Tears)
3. Johnny, Have You Come Lately
4. A Matter Of Time
5. You Make Me Physically Sick (Let’s Start Having Children)
6. I Only Smoke When I Drink
7. No Longer Young Enough
8. Someone Else That You Like More Than Me
9. Read In Public Places
10. Big Blue Moon
11. Biblically Speaking
12. Sleeperbloke
Pre-order here: shop.fikarecordings.com
http://fikarecordings.com/