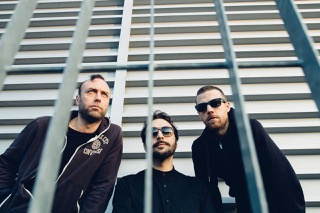 STEARICA CELEBRATE 20TH ANNIVERSARY WITH NEW 20 MINUTE AND 20 SECONDS LONG TRACK ‘20YRS’
This year marks the 20th anniversary since Turin-based instrumental trio STEARICA began to play together. Yes, they met as kids in school! Their many years of friendship and musical collaboration have allowed them to develop their almost-telepathic tightness onstage, in which they seem to play as one three-headed beast.
To mark the occasion, they have undertaken a single-track musical odyssey of 20 minutes and 20 seconds duration. It encapsulates the passion of 20 years of playing together and their shared love of combining primordial rhythms and infectious melodies with avant-garde stylings.
Produced by band member Francesco Carlucci, 20YRS features guest appearances by Eros Giuggia on alto and soprano sax and Franz Goria from Fluxus on vocals.
The track will be available as a digital download and as part of a deluxe limited edition package of 100 screen-printed posters by Malleus on 24th November, which can be ordered from the Monotreme Records web shop:
http://monotremerecords.limitedrun.com/categories/stearica
The band will celebrate their 20th anniversary with a show at Electrowerkz in London on 25th November.
25/11 Electrowerkz – London (UK) w. Casual Nun
STEARICA are:
Francesco Carlucci:  guitars, synths, additional acoustic and electronic sounds, sax orchestration
Davide Compagnoni:  drums
Luca Paiardi:  bass
Friends
Eros Giuggia: sax alto & soprano
Franz Goria: voice
Produced by Francesco Carlucci
Music by STEARICA
Lyrics by Francesco Carlucci and Franz Goria
Recorded by Daniele Mattiuzzi and Francesco Carlucci at Wave Life, Torino + Blu Room, Chivasso (TO)
Mixed by Daniele Mattiuzzi and Francesco Carlucci at Wave Life, Torino.
Mastering by Daniele Mattiuzzi at Wave Life / Torino
Artwork cover by Moisi Guga / www.moisiguga.com
Artwork poster by Malleus / www.malleusdelic.com