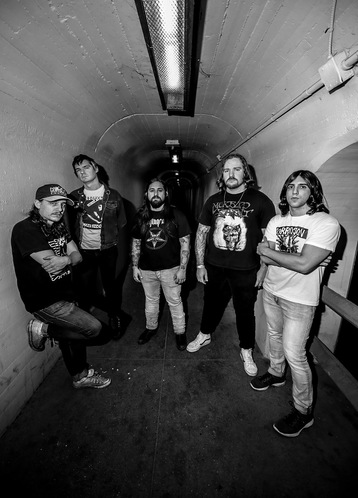 POWER TRIP ANNOUNCED AS PART TRIVIUM’S “THE SIN & THE SENTENCE TOUR” PRESENTED BY METAL HAMMER;
ALSO FEATURING CODE ORANGE & VENOM PRISON; TICKETS ON SALE NOVEMBER 10TH
Power Trip are announced as part of Trivium’s “The Sin And The Sentence” tour in Spring 2018.  Presented by Metal Hammer, the tour kicks off in Koln on March 11, and wraps up in the UK on April 21 at London’s O2 Academy Brixton, with Power Trip supporting across all shows.
About the tour Trivium reveal, “One of the greatest things about headlining a tour is picking the bands to round out the bill. Code Orange, Power Trip, and Venom Prison are not only the leading edge of the next wave of great metal acts, they are also three of our personal favourites… “
Metal Hammer adds, “Heavy music is on absolute fire right now, and this bill proves it. Metal Hammer couldn’t be more delighted to be supporting our brothers in Trivium alongside three truly excellent young bands in Code Orange, Power Trip, and Venom Prison on a tour that is going to tear 2018 to shreds. See you next Spring, motherfuckers!”
Power Trip are sure to be performing choice cuts from their widely praised, second album, Nightmare Logic (Southern Lord). About the tour they say, “We’re honoured to come to Europe for our fifth time, especially with such a massive band as Trivium. We’re excited to watch and learn from Trivium and hang out with our friends in Venom Prison. The end of the tour has Code Orange joining the package; it’ll be good to play with those lunatics again. That’s it. That’s all. Don’t fuck up and miss this tour.”

Nightmare Logic
Power Trip
Southern Lord
Southern Lord Europe store
POWER TRIP IS:
RILEY GALE, BLAKE IBANEZ, CHRIS ULSH, NICK STEWART, CHRIS WHETZEL
“one of the best live acts of the modern day” – LOUDWIRE
“You don’t need to be a metalhead to have a blast with Nightmare Logic… Power Trip’s fist-pumping choruses, ricocheting grooves, and ample charm are so animated that they leave us with something addictive and, well, fun.” – PITCHFORK – BEST NEW MUSIC
“Mixing a fearsome thrash attack with sick hardcore grooves, Texan crossover crew Power Trip are what beer and headbanging were made for.” – METAL HAMMER
“Equal parts righteous bloodletting and revenge fantasy… Power Trip have always found their sweet spot in the reverb-heavy fog of 80’s metal” – PITCHFORK
“Perfect early crossover thrash, the right mix of speed and death metal, with hardcore attitude…Early Sepultura, mid-period Cro Mags and late Anti-Cimex with austerity measures in place: there is no flab. Classic but fresh, miss this at your peril.” – ZERO TOLERANCE
“This eight-song effort serves as a breathless, panic-inducing assault on the senses; delivering A-grade riffs, punch-in-the-throat immediacy and more ass-kicking per second than many will be able to withstand.” – ROCK SOUND
“the best they’ve sounded, the tightest representation of their no-holds-barred thrash attack that pummels you into dirt for 32 frenzied minutes straight, without so much as a 10-second breather” – BILLBOARD
“possesses a certain monolithic quality Lemmy would admire: a massive rawness and a sludgy, heavy hopelessness that thrashes with punk immediacy and metal intricacy…it’s a track preparing for war” – NPR
“one of the most highly anticipated records in aggressive music in recent memory” – THE NEW YORKER
POWER TRIP