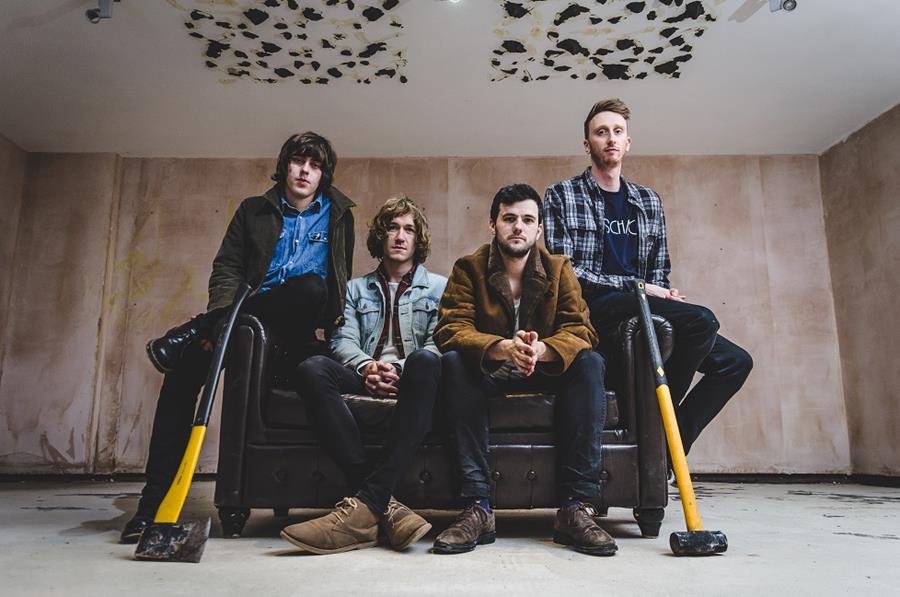 “Built upon a menacing drum-and-bass groove and massive slabs of guitar feedback, “Raus!” ruminates on the misery and mundanity of working-class life in post-general election Britain.” – Billboard

Leeds quartet NARCS have shared their new video for ‘Raus!’, a single taken from their sophomore album ‘A Thinking Animal’, which was released via Clue Records. The video was premiered exclusively by Billboard HERE.

Speaking about the single, Joe Angus (guitarist) said, “Raus as a song was a long, drawn out process to make something coherent out of a whole host of churning, grinding grievances we had about the way things were for us, as individuals and as a country. The song was born at a time when I (Joe – Guitar) had stepped away from the band, for the sake of my mental wellbeing more than anything, and the other lads were jamming with Sam and Jack (formerly of leeds band Insatellites). The instant correlation between what goes on in Westminster and the everyday gnawing shittiness of the average working life. It’s just a guttural outpouring of that sinking feeling post-General Election, set on top of this incessant industrial rhythm. We were listening to a lot of The Fall and Girl Band at the time, so we made absolutely no effort to make it fun or abide by any sort of received pop structure. It felt at times during recording that we maybe just indulged ourselves in our anger too much for others to really click with it, but as it turns out, it’s probably the most popular song on the album. Which goes to show, I guess, just how utterly disenfranchised and aggrieved people are with life in the UK. “

‘Raus’ is a passionate yet desolate onslaught focused on voicing the bands tribulations with the increasing unrest across the UK in post-General Election Britain, average working life and the band members personal experiences as individuals. The track is a brooding statement, pushed on by sparse bass while the guitars scream as hard as the impassioned vocals. With verses that exchange caustic guitar feedback for trenchant lyrics and cacophonous instrumental sections that culminate in a volatile rhythmically driven end section, the track perfectly conveys the bands frustration and dejection at current state of the country’s political and social status.

2015 saw the band play Leeds & Reading Festival, Long Division, Tramlines and complete a full UK tour, whilst picking up acclaim from BBC 6 Music, Amazing Radio, Noisey and more. Whilst last year saw the band play the DIY stage and Live at Leeds as well as Leicester’s Handmade Festival, 2000 Trees, Tramlines and a number of other dates. The band then decide to go on hiatus for the foreseeable future, with guitarist Joe Angus moving to New Zealand.

Speaking about his departure, he goes on to say, “I couldn’t handle it for much longer, so I made a big leap with my partner and kids to New Zealand. The writing had dried up and I wasn’t able to do my job and produce any sort of clarity to put pen to paper. It’s not the end of NARCS for certain, but it’s definitely the start of new things for all of us. Keep watching the skies and never stop punching Nazis.”

To support the video, ‘Raus!’ will be released on 24th November as a digital standalone single and across streaming services, and similarly the band’s last album ‘A Thinking Animal’, is currently available on blue vinyl for just £4 or PWYW for the digital download from the Clue Records Bandcamp page HERE