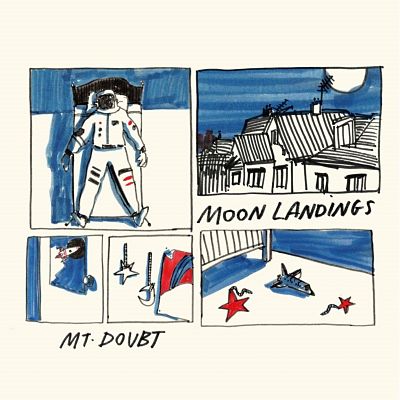 Following the critical acclaim of their previous EP, The Loneliness Of The TV Watchers, Mt. Doubt‘s new EP Moon Landings is out now via Scottish Fiction. Its is available on Spotify and Apple Music now.

To celebrate the release, the entire EP is streaming exclusively on For The Rabbits now. Mt. Doubt also recently shared the EP track Teeming, which is available to download for free via the band’s Soundcloud page.

Talking about the EP, Bargery explains “it all really benefits from the input of Ryan Firth who has recently become more involved in the whole recording process with Mt. Doubt. His keys really elevate a lot of the material as do the lovely vocals of Annie Booth, which are a bit more of a focal point here than they have been in the past!”

Starting out as Bargery’s solo project, Mt. Doubt has since expanded into a collective of five musicians, each bringing something unique to the table. Since the release of their critically acclaimed albums In Awe Of Nothingand My Past Is A Quiet Beast, and most recently The Loneliness Of The TV Watchers, Mt. Doubt have received praise from the likes of The Scotsman, The National and Team Rock, as well as BBC 6Music and BBC Radio Scotland to name but a few. They are also no strangers to the Scottish live circuit, having performed at T In the Park, Brew At The Bog and supported We Were Promised Jetpacks, Admiral Fallow and White Liesamongst others.