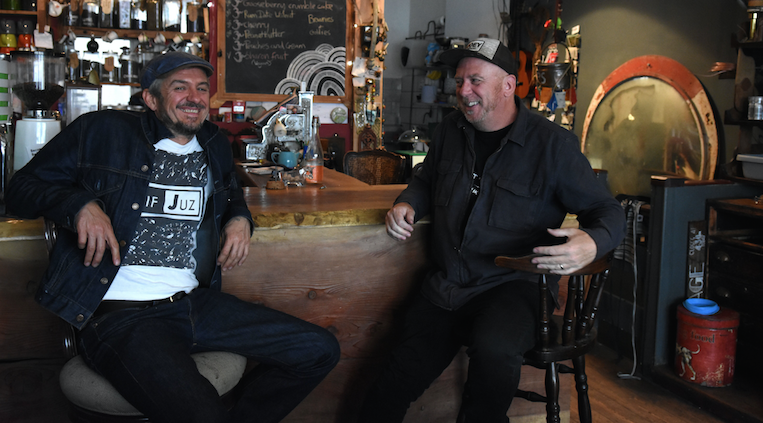 With their debut album Ojalá due for release this Friday, 3rd November, on Bella Union, Lost Horizons have shared a video to the track “Score The Sky”, featuring vocals from The Duke Spirit’s Liela Moss. Here’s a quote from director Derrick Belcham: “The video for Score The Sky is an attempt to visualize the kind of mystical experience of achieving a sense of oneself, constantly switching between chasing and fleeing elements of the psyche that are buried, and either want to stay that way, or else come erupting forth. The dancers, Nicole and Rebecca, explore the decks of the SS Columbia as a borrowed symbolic environment for the labyrinthine passageways of persona and complex, all taking place in the mind of one woman, likely in a single moment.” Watch the video below…

Having played their debut UK show at Liverpool Music Week last night, Lost Horizons will head out on tour throughout November beginning at Iceland Airwaves Festival in Reykjavik and reaching the UK for a bunch of shows in the second half of the month. For the live incarnation of the band, Lost Horizons will include three vocalists: Ed Riman aka Hilang Child and Beth Cannon, both of whom appear on the album, as well as Helen Ganya Brown who records under the alias Dog In The Snow. Dates/ info below:

Due for release this Friday, Ojalá incorporates a heady cast of guest singers. Some are signed to Bella Union, such as Marissa Nadler and former Midlake frontman Tim Smith, while others are long-time favourites of Raymonde’s (Leila Moss of The Duke Spirit and Ghostpoet), or newer discoveries (Beth Cannon, Hilang Child, Gemma Dunleavy and Phil McDonnell). Together, the Lost Horizons ensemble has created an hour of exquisite, expansive and diverse spellcasting.

Before he started Bella Union, Raymonde was the bassist of the seminal Cocteau Twins, where the vein of melancholia went very deep. Even before the band had signed to 4AD, the label were releasing records by the instrumental quartet Dif Juz, arguably the first word in post-rock, 15 years before it became a trend: Thomas was their anchor; the engine room of their wondrous free-flow. The two bands became friends, and toured together.

Raymonde and Thomas had made demos together in the eighties, but filed them away – though they did collaborate on ‘Ivy And Neet’, found on This Mortal Coil’s second album Filigree & Shadow (1986), with Thomas adding a spiralling saxophone to Raymonde’s improvised piano. But both found their journeys diverging. Long after Dif Juz split, Thomas had toured with The Jesus And Mary Chain, Moose, Felt and, in the nineties, Cocteau Twins. But as he recalls, “The business side of music became too painful. I had too much love for music that wasn’t returned. But Simon has music in his heart and soul, he’s extremely talented, and I wanted to get him making music again. And when the idea of jamming together came up again, I got really excited, which I hadn’t felt about music in ages.”

The pair booked four days in an east London studio, with Raymonde on piano and Thomas on drums, and a simple plan: “It must feel like fun, never a chore, and it had to be improvised,” Raymonde explains. If it never became a record, it didn’t matter. It was all about recapturing that feeling when you’re 15, making music with friends.”

As the songs took shape, Raymonde began thinking of singers to approach that would suit each, and to his surprise and joy, they all agreed. The same ground rules as the original sessions applied: “There were no, ‘Am I going in the right direction?’ conversations. It had to be about the moment, about what felt right.”

Indeed, Ojalá was made for its core duo’s need to make music, and to create something beautiful, and meaningful, in these dark times. It’s why the record is named after the Spanish for “hopefully” (or “God willing”).