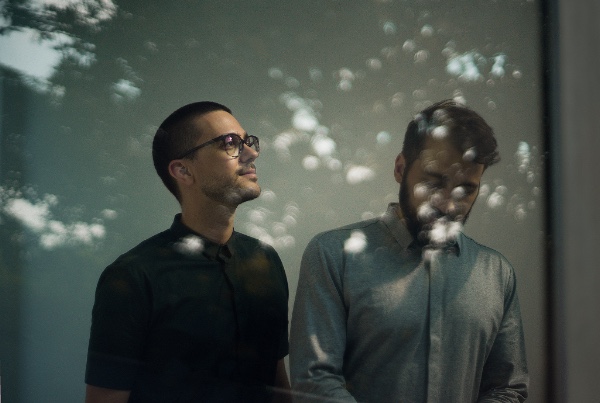 – SHARE VIDEO FOR “FROM A DISTANCE”
– LONDON SHOW THIS MONTH!
– NEW ALBUM ‘OPEN’ OUT NOW ON CITY SLANG

‘Sit down with this record, embrace and absorb it; at its finest, it will really transport you’ – 8/10 Loud and Quiet
‘The divine collage of sounds and futuristic atmosphere make it an essential listen’ – 8/10 CLASH
‘It’s a true pleasure to get lost in such a graceful, deceptively simple world. Open is a true treat’ – 8/10 The 405

Ahead of their show at London’s Rich Mix on November 21st, Grandbrothers have shared an atmospheric and visually striking new video for ‘From a Distance’, taken from the group’s latest album ‘Open’, which was released on October 20th via City Slang.

Speaking about the video, director Dan Medhurst said: ‘The film is a loose adaptation of the ancient Greek myth of Sisyphus who struggled to push a large rock up a mountain only for it to roll back down and for him to start again each day. It tells a tail of eternal struggle for our lead character (played by Mark Wingett) who appears to be locked in a convoluted journey for victory, but ultimately ends up back where he started. It also plays with the concept of eternal recurrence; That the universe and all existence has already occurred and will continue to reoccur infinitely.’

“I chose to shoot in the Brecon Beacons at night to emphasise a feeling of total isolation. We used a high powered custom built LED attached to a drone to light our character and shot on 50 year old, Russian anamorphic lenses to create haunting, unusual visuals which play with the idea of distance and anonymity.’”

Grandbrothers are the sum of unique parts: progressive Swiss engineer/mechanic/sofware designer Vogel and German-Turkish pianist Sarp. Their second album ‘Open‘ twins Sarp’s piano skills with Vogel’s talent for both building the formidably intricate mechanics with which he exploits his partner’s instrument and also designing its software. Sarp works at his ivory keyboard while, from behind his own computer keys, Vogel live-samples his partner’s notes, triggering further effects with the aid of homemade apparatus that physically manipulate the piano’s strings and body.

The greatest revelation for anyone hearing them the first time remains the element constant to everything they’ve recorded: every individual sound that Grandbrothers make stems from one single instrument, a piano. No wonder their music was once memorably described as “open heart surgery on a grand.”