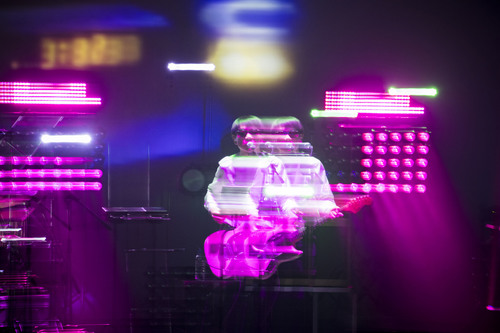 Cornelius
Announces Mellow Waves Physical Release with Limited Edition and Standard Vinyl
Limited Import of Three 7” Singles – “If You’re Here”, “Sometime / Someplace” and “In a Dream”
Empire of the Sun “Way to Go” Remix – Listen on Spotify
Watch the Live Video For “Helix / Spiral” HERE
Mellow Waves, Cornelius’ first album in over 11 years will be available in a limited deluxe edition pop-up gatefold vinyl (including phenakistoscope animation insert), standard package on 180g, CD and cassette format on 26 January 2018. The album was previously released in July on digital only. Pre-orders for these formats are available now.
Cornelius announced eight North American dates for March 2018, including shows in Mexico City for the NRMAL Festival, New York’s Irving Plaza, the Carnegie Music Hall at Pittsburgh’s Andy Warhol Museum, and LA’s Fonda Theater. There will be UK dates next year.
A limited import of the “If You’re Here”, “Sometime / Someplace” and “In a Dream” 7” singles from the Mellow Waves album, previously only available in Japan, will hit retailers on 17 November.
The Australian Dance-Pop outfit, Empire of the Sun, enlisted Cornelius to remix “Way to Go” from their new EP, On Our Way Home.
Filmed live at his record release shows at Tokyo’s Liquid Room, “Helix / Spiral” captures the Cornelius live experience, with its Kraftwerk-esque roboticism and immersive visuals meticulously synchronized with the performance from The Cornelius Group.
Pre-order links:
http://cornelius.storenvy.com/collections/1518050-mellow-waves

Cornelius – Mellow Waves
(Vinyl edition out 26 January – Rostrum Records)
Mellow Waves track list:
1. If You’re Here
2. Sometime / Someplace
3. Dear Future Person
4. Surfing on Mind Wave pt 2
5. In a Dream
6. Helix / Spiral
7. Mellow Yellow Feel
8. The Spell of a Vanishing Loveliness
9. The Rain Song
10. Crépuscule
For the uninitiated, Cornelius is the brainchild of Japanese multi-instrumentalist Keigo Oyamada.  A performing musician since his teens, Oyamada created his creative alter-ego (the name is an homage to the Planet of the Apes), in the early 1990s from the ashes of his previous project, Flipper’s Guitar.
With the 1997 release of Fantasma, Cornelius gained international recognition for his cut and paste style reminiscent of American counterparts Beck and The Beastie Boys and was released internationally by Matador Records. Being called a “modern day Brian Wilson” for his orchestral-style arrangements and production techniques, Cornelius subsequently became one of the most sought after producer/remixers in the world, working with a wide range of artists including Blur, Beck, Bloc Party, MGMT, and James Brown.
With 2002’s Point, Cornelius’ music took a quantum shift, going from sampling “found sounds” to looping organic elements and creating lush soundscapes.  Using water drops as the rhythmic backbone of “Drop” on his vocoder-infused cover of “Brazil”, the album dazed and amazed fans and set the path for the next phase of his career.
2007 brought this philosophy to an even higher level with the release of Sensuous. Cornelius’ live shows are known around the world for spectacular visuals (all perfectly synchronized to the performance), custom lighting that doesn’t simply augment the performance, but becomes another instrument within it, and a full band of equally talented and diverse players.
The companion piece to the album Sensurround + B Sides, earned the nomination for “Best Surround Sound Album” at the 2009 GRAMMY Awards.
The summer of 2016 saw the release of Fantasma  Remastered, on Lefse Records.  The package, a 2LP reissue of his classic album, also included 4 additional outtakes and earned Pitchfork’s “Best New Reissue”.
Cornelius has recorded music for Edgar Wright’s Scott Pilgrim vs. the World, scored the anime mega-film Ghost in the Shell Arise,performed as the backbone of Yoko Ono’s reformed Plastic Ono Band, played the Hollywood Bowl with Yellow Magic Orchestra, and co-wrote and produced the Japanese artist salyu x salyu.
“Cornelius, aka Keigo Oyamada, burst onto the U.S. radar with 1997’s Fantasma, an overwhelming bricolage of Beach Boys harmonies, psych-pop precision parts, and odd samples that fit perfectly between the sunny naïvete of the Elephant 6 collective and the cosmopolitan chic of the Grand Royal label. His 2001 album Point refined the exuberance, but laid bare Oyamada’s prog-rock affections, kraut rhythm obsession, and new age production ear for exquisite organic sound artifacts. Between then and now Cornelius has remixed in 5.1 surround sound, produced sound/film/video art installations, recorded commercials, produced a number of artists, and been raising his son Milo with his wife Takako Minekawa. His 2007 album, Sensuous, delivered its title as a new age-prog jazz aural rubdown standing firmly and proudly outside trends.” – Pitchfork
“From rock riffs to cheesy electronics, nothing is off limits here, the gurgling stream of playful beats and gorgeous melodies carried along on a tide of Can’s dreamy krautrock, ambient instrumental bliss and infectious ’70s rock grooves.” – Q Magazine
“Cornelius‘s 1997 album Fantasma introduced the genre-defying Japanese artist (Keigo Oyamada) to most of the Western world with it’s everything-in-a-blender style. Nearly 20 years later it still kinda sounds like it’s from the future. (Or the ’90s future some imagined Tokyo to be.)” –  Brooklyn Vegan
Cornelius Online:
corneliusjapan.com