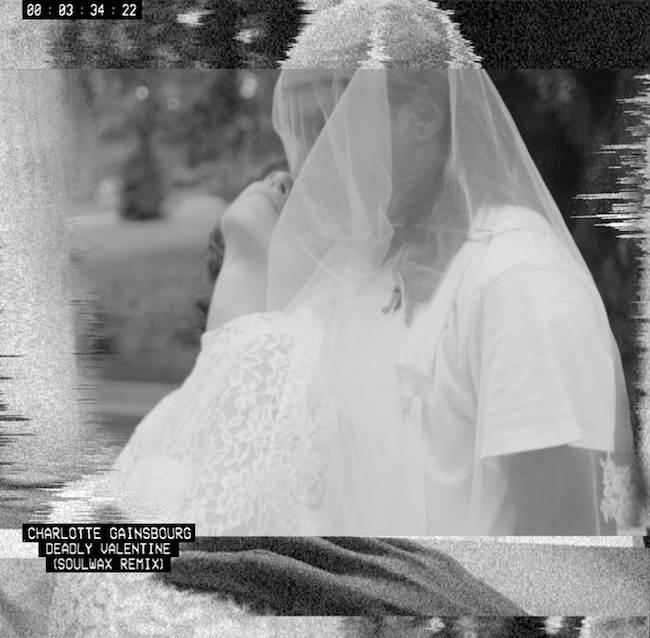 NEW ALBUM ‘REST’ OUT 17th NOVEMBER ON BECAUSE MUSIC
“A chandelier made of strobe lights” Dazed and Confused
“A comfort blanket of the chicest variety” The Guardian
“One of the bravest performers of our time” Elle UK
“A powerful, brooding, enveloping return” Clash
Charlotte Gainsbourg’s current single ‘Deadly Valentine’, taken from her forthcoming album ‘Rest’ (out 17th November), has been remixed by Belgian DJs extraordinaire Soulwax.
The Dewaele brothers said: ‘We have been Charlotte Gainsbourg’s fans from when she was still a teenager until now, so we were of course honoured to be asked to rework one of her songs, especially since she had written it with our friend SebastiAn. This remix was made with our favourite club, Despacio in mind and is our ode to Charlotte’s voice.”
To accompany the album, Charlotte has directed a series of music videos – starting from the hypnotic, insinuating ‘Rest’ and moving into the dreamy ‘Deadly Valentine’, featuring Dev Hynes.The most recent video has been for the album track ‘Ring a Ring O’ Roses’, which stars her son, Ben Attal, whose resemblance to his mother feeds into the track’s cyclical depiction of gratifying initiation as its own matter of repetition, experienced one generation after the next.
Produced by Ed Bangers’ SebastiAn (Frank Ocean, Kavinsky) and mixed by Tom Elmhirst (Adele, Lorde, David Bowie), ‘Rest’ is Gainsbourg’s first studio album in seven years and features collaborations with Sir Paul McCartney, Daft Punk’s Guy-Manuel de Homem-Christo (Daft Punk), Connan Mockasin and Owen Pallett (Arcade Fire, Caribou).
The eleven essays on ‘Rest’ are nothing if not sure-footed, proffering a compelling fusion of gleaming, string-emblazoned modern electro-pop and cinematically textured avant-chanson – their magical music box melodies kissed by bruised, introspective, occasionally disquieting lyrics. The album opens with ‘Ring a Ring a Roses’ and ends with the electro-disco-flavoured ‘Les Oxalis’. In between, there’s ‘Lying With You’, whose busy drums and angular synths frame a lyric about Serge Gainsbourg’s death, the frank, self-examining ‘I’m a Lie’ and the wonderfully Giorgio Moroder-esque ‘Deadly Valentine’, whose lyrics, essentially a string of uncannily delivered wedding vows, play out against a motorik Euro-disco beat and soaring strings.
Another essay, ‘Songbird in a Cage’, was penned for Charlotte by Sir Paul McCartney, no less. “We had a very nice lunch about six-and-a-half years ago”, she recalls. “I told him that if he ever had a song for me it would be a dream come true. A few weeks later he sent this track. It was a demo. I didn’t know what to do with it, because I wanted it to be part of the album. We had to reinvent it. Paul very sweetly came to Electric Lady. He did a bit of piano, some bass, a bit of guitar. It was incredible, just to see him work”.
The aides-de-camp may have played their role on Rest, but it remains undeniably the work of a singular artist. “This time it felt like flying on my own. I knew I needed the right collaborator, and SebastiAn was always there, but all the same, this time the album is really mine”.