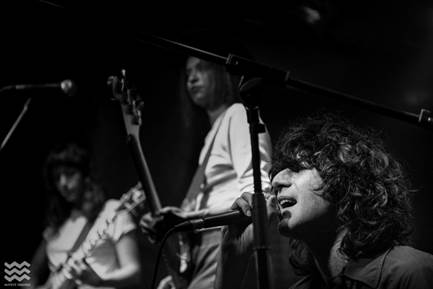 with support from Phobophobes, DOLLS and ACM

“One of the most extreme and extremely enjoyable albums of the year.” – Louder Than War

“Given this dearth of decent guitar music, it’s something of a surprise when one comes along and punches you in gut. Or in the case of Arrows of Love, perhaps plunges you one in the eye.” – The Quietus

Following their 27-date worldwide tour, London’s premiere art-rockers return home to celebrate the release of their critically acclaimed second album ‘PRODUCT’. The five-piece will play Islington’s Electrowerkz with support from Phobophobes, DOLLS and ACM as well as a special guest DJ set fromFlamingods, presented by Club The Mammoth. There’ll also be an exclusive exhibition displayed in the venue from local artist Ali Leys.

Arrows Of Love have a reputation amongst fans as something of a live phenomenon. Originally aligned with the early East London wave of bohemian rock bands, it was their fierce performances and creativity that has taken them across the globe, to the likes of SXSW and End of the Road, to sharing stages with the likes of The Fall, Buzzcocks, British Sea Power, 80’s Matchbox B-Line Disaster, The Wytches and many more.

On their new record the collective weave a world which is in equal parts powerful and vulnerable, where poetry meets pure punk attitude. The LP was produced by Mikko Gordon (Thom Yorke, Gaz Combes), in the studio he built himself at Goldsmiths University, and mastered by Bob Weston of Shellac.Lead track ‘Signal’ was also given a mix by celebrated engineer Margo Broom (Fat White Family).

Drawing comparisons to the discordant, emotive musicianship of Sonic Youth to the raw power of McClusky, this second LP sees a band fully diversified, and truly unique.