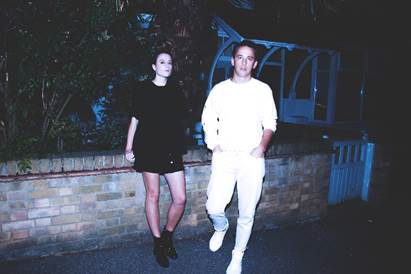 “Future-forward production with a pop feeling”

“Wonderfully atmospheric dance that’s perfect for those who prefer things to not be quite so bangin’.”

Gavin Dwight and Jen Cosgrave layer their dreamlike vocal harmonies over washes of electronic grooves and hypnotic beats. AGE co-produced the single with mixing engineer Russ Fawcus (Wild Beasts, Noah And The Whale) and it was mastered by Mandy Parnell (Jamie XX, The Knife).

After playing in various other bands, they’ve since split their time writing and recording from bedroom sessions in Clapton to overnight shifts at North London’s Tileyard studios (before they were kicked out to make way for Lily Allen). Despite forming last year and only having played a small number of warm-up shows, they recently supported Temper Trap and played the Radio X/AIM Awards. The band are currently in the studio working with producer Paddy Baird (brother of Two Door Cinema Club bassist, Kevin Baird), on their debut EP.

DEAD CROSS SHARE THE VIDEO FOR “CHURCH OF THE MOTHERFUCKERS”