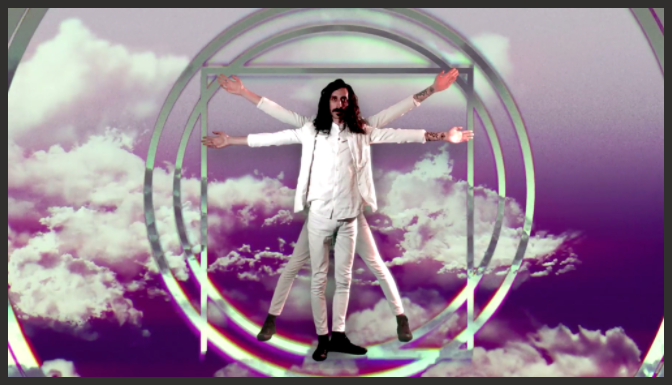 One of the most exciting and exhilarating alt-rock bands on the planet Turbowolf, have released the hypnotic video for their new single ‘The Free Life’, the title track from their upcoming third album which will be released via So Recordings in March 2018. The track premiered on Kerrang!, who said “we’ve been taken into a world of pure batshit craziness, and we don’t want to ever leave.”

Renowned for their monstrous, psychedelic rock’n’roll, the video invites you into the eccentric whirlwind of Turbowolf, with kaleidoscopic colours, delirious visuals and retro, distorted fuzz. The video was made by Casey and Ewan who have previously made two videos with Turbowolf, ‘Rabbit’s Foot’ and ‘Let’s Die’.

Lead singer Chris Georgiadis says, “Hope you enjoy our new video for ‘The Free Life’. Made by two of the most dudular dudes, Casey and Ewan. Much love to them. So sit back, open your ears and eyes and drink down this nice warm glass of magic. You’re welcome.”Casey and Ewan have previously made two videos with Turbowolf, ‘Rabbit’s Foot’ and ‘Let’s Die’.

‘The Free Life’ is a six-minute introduction to the wonders that abound on the forthcoming album, promising marvellous eccentricities laced with euphoric musical content and intriguing lyricism about magic, mystery and reality itself.

Chris comments on the band’s return, “Welcome back. How are you? We’re great, thanks for asking. Our new album ‘The Free Life’ is what we’ve been doing recently. We’ve taken the liberty of packing it full of great songs for your listening pleasure but would still appreciate your feedback. Contact us by whispering your thoughts and feelings into the breeze. Be kind to yourself and enjoy it.”

The Bristol-based band immediately sparked attention with their self-titled debut and in 2015 released their follow-up, the acclaimed second album Two Hands, which features the huge singles ’Solid Gold’, ‘Rabbits Foot’ and ‘Rich Gift’.

Championed across the board at Radio 1, Turbowolf have toured relentlessly, playing with bands as diverse as Royal Blood, Death From Above, Soulwax and Korn and have torn up festival stages everywhere from Download and Reading & Leeds to SXSW, Aftershock and Hurricane & Southside.

They are now back on the road for a seven-date headline tour which kicked off last night in Exeter and culminates on October 31st with a FREE Halloween show at London’s Old Blue Last.