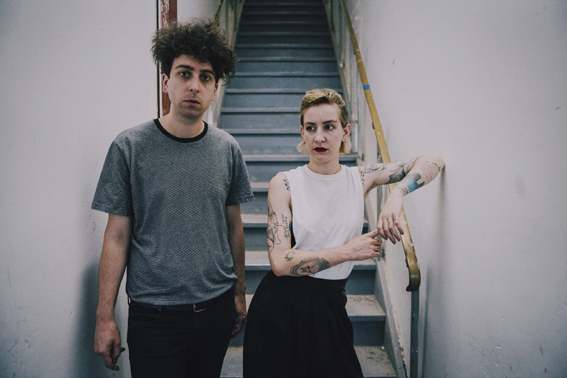 “All Things Considered” is similar in style to their previous video for “Retreat (Light The Fire”) and also directed by Christopher Mills.

“All Things Considered is the moment after something big,” says Mills. “So big it totally altered time and space and turned the world into a demolished, abandoned art gallery, surrounded by flaming ruins and inhabited by magic women who seem to be stuck in a broken portal vortex.”

“[It’s] the aftermath,” writes Beliefs’ Jesse Crowe. “It’s the cold death of culture that the city has long forgotten. It’s the ash left smouldering. After the fire. It’s the remanence of poison on the rim of the Kool-Aid cup.”

“All Things Considered”  is taken from Beliefs third album, Habitat, which is out now on Outside Music/Hand Drawn Dracula.

The shoegaze, post-punk duo are one of the most renowned Toronto bands with co-founder Josh Korody becoming the engineer of choice for bands such as Dilly Dally, Weaves, Greys and more. Following their explosive set at The Great Escape this past May, the band return to the UK for a handful of dates which will find them back in Brighton supporting good friends, and fellow Torontonians, Metz.