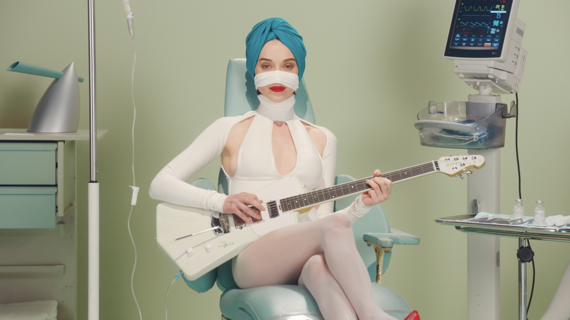 St. Vincent has unveiled the music video for “Los Ageless,” from her forthcoming record ‘MASSEDUCTION’ out October 13 on Loma Vista Recordings.  The video was supported by Red Bull Music and directed by Willo Perron.

On 7th October, St. Vincent will present “St. Vincent: Fear The Future,” a special live performance of ‘MASSEDUCTION.’ The show’s world premiere is part of the Red Bull Music Academy Festival Los Angeles. The collaboration will bring the forthcoming album, as well as previous St. Vincent material, to life in technicolor. Fans can also tune in to hear the show live via Red Bull Radio.

St. Vincent will head to the UK next week to appear on Later… with Jools Holland ahead of the album’s release and her London, Manchester, and Dublin shows the week after.

‘MASSEDUCTION’ was co-produced by St. Vincent and Jack Antonoff at Electric Lady Studios in Manhattan, with additional recording at Rough Consumer Studio in Brooklyn, and Compound Fracture in Los Angeles.

“Many artists take cues from Bowie but she’s the closest thing we have to his audaciously protean vision of pop stardom: a living art project that contains multitudes” – – Q

*“Pop is a vehicle, a form, a challenge, a temptation and an adversary for St. Vincent on ‘MASSEDUCTION.’ Its crisp, catchy but still idiosyncratic songs ponder, among other things, what to make of fame and success.” – NY Times

*“We’re blessed to be on Annie Clark’s timeline, though she operates at a frequency several levels above all of us.” – Noisey

*“An album you need to hear this fall…a treat worth savoring.” – USA Today

“A career summit. It’s her ‘Lemonade,’ her ‘OK Computer’—whatever reference conveys the urgency with which it demands to be listened to when it drops.” – Nylon

11. Dancing with a Ghost